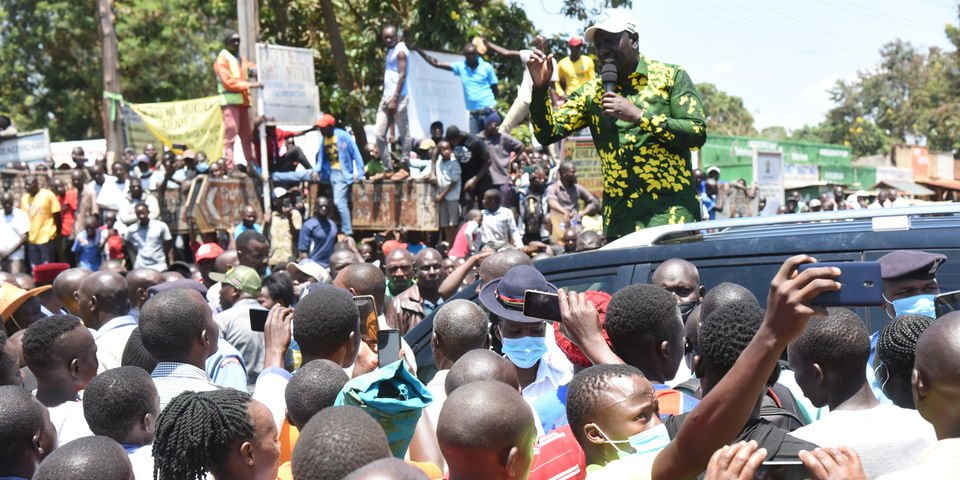 Deputy President William Ruto met resistance in Busia County on his second day of his tour in Western region on Saturday, after youths lit bonfires, blocked the road and lit bonfires at Korinda junction and pelted his convoy with stones.

On Saturday, the deputy president addressed his first rally in Butula before moving to Bumala market.

At least four vehicles, including a Citizen TV vehicle, were slightly damaged.

“I saw bonfires in the middle of the road before they started throwing stones at us,” said Ms Ongoma.

Eng. Michael Malomba said the windscreen of his vehicle was shattered during the attack by the irate youth.

After addressing a rally at Nambale, the DP forced his way back to Busia town where he addressed his supporters amid tension and tight security.

The youths, who attempted to disrupt the DP’s rally were repulsed by anti-riot police. Some of the youths were armed with teargas canisters, bows and arrows.

Dr Ruto condemned the violence and dismissed his competitors saying they lacked an agenda. He accused them of hiring youths to disrupt his rally.

“We have no interest in violence. We want each one of us competing to succeed President Uhuru Kenyatta to sell their manifestos so that Kenyans can identify the best agenda that suits them. Those who lack an agenda should not use youths to block those with a manifesto to sell to the voters,” Dr Ruto said in Busia.

He said Kenya is past the era of throwing stones.

“Those interested in throwing stones should involve their sons and daughters and not those who need to be empowered to cause violence. We will set aside Sh100 billion to create jobs for four million youths annually,” he added.

He asked Busia residents to change their mindset and discard the politics of ethnicity.

“Busia will not remain an ODM zone, those who think we cannot enter Busia town should know that we are all Kenyans and that Busia is changing,” he said.

“We are telling those who use young citizens to cause chaos and shame on them,” he added.

The Deputy President asked Ugandan President Yoweri Museveni to authorise the release of a lorry from Kenya said to have been impounded while ferrying fish from Uganda.

Garissa Town MP Aden Duale asked the Kenyan youth not to accept being used to promote politics of ethnicity and violence.

“In UDA, we have an agenda of empowering vulnerable Kenyans as opposed to our competitors who still thrive in stone throwing,” he said.

Soon after the DP finished his speech, people left in a huff in fear of being assaulted by rowdy youths.