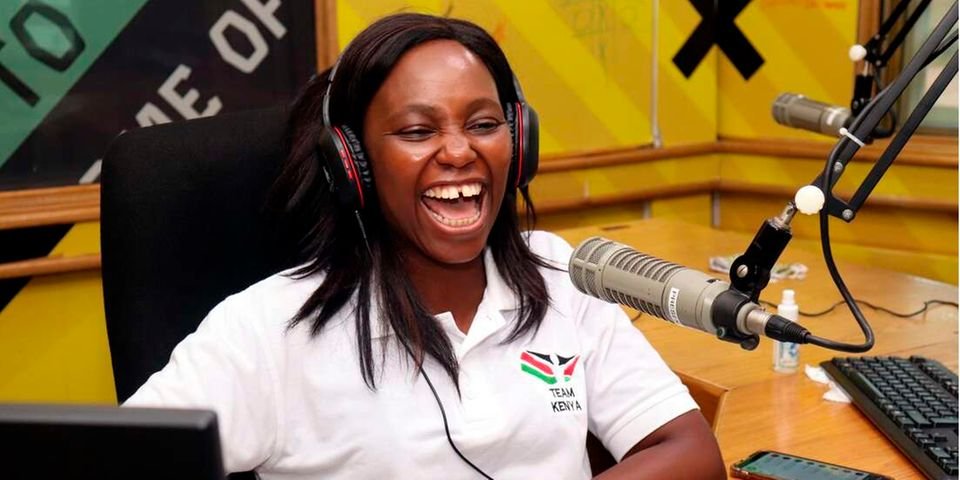 Carol Radull’s universe is full of light and laughter. Nothing stands out about the veteran journalist quite like her radiant demeanour and charismatic smile.

Radull is more than a sports journalist. She is, hands down, the personification of excellence in journalism, the result of two decades of refinement. There’s nobody better to talk about sports in Kenya and Africa, women in sports, football and the future of Kenya’s athletics – she agrees with glee and a bit of blushing.

After 21 years at the Radio Africa Group, Radull is bringing her famous smile to the Nation Media Group. I begin by asking about her social life, what is she like away from the euphoria, the raw emotions of sports?

Radull is a fitness junkie. At this stage of her life – she is well in her 40s – health comes first, she says, which is why she always has water by her side. During the one-hour duration of this interview, she will drain a pitcher.

Grief has courted her family all her adult life. Radull lost her younger brother in the 1980s to cancer. In 1998, her elder brother was stabbed to death by criminals. Eight years ago, cancer struck again, this time taking her dad. Just when her coast seemed to clear, her marriage went asunder.

She is disinclined to talk about these whirlpools, only observing: ‘‘It’s hard to live life without your brothers once you’ve had them.’’ She adds: “Anyone who’s had cancer in their family will tell you it’s a long, hard, stressful and emotionally draining experience.”

Over the years, she has established a morning routine of praying and reading the Bible.

“We’re all at God’s mercy. I pray for the health of the sick and better health for the healthy. We’re living at a time when people are sicker and with less money.”

Does she have a family?

“Family is a private affair to me,” Radull replies. “I’m happy in my space, in my relationship status and my family life,” she adds, and indicates that the subject is closed.

When you’re in your own lane, there’s no traffic, reads her bio on Instagram. The import? “Compete with yourself,” she explains. “We are all in different stages in life. I have a long career behind me, for instance. In every aspect of my life, I’m competing with myself.”

I wonder what path she’s orbiting, and if there is any particular song that speaks to her circumstances in life at the moment?

“Us against the world,” she blurts, adding quickly, “not in a romantic sense. I’m at a point where I’ve been singing the same song over and over about the state of sports in Kenya. It doesn’t matter what the sport is, the issues are the same. Even after banging my head on a brick wall, I’m unsure if anyone is listening or whether I’m making any impact. I feel like it’s me against the world.”

On aspirations, she says raising her family is a priority. Professionally: to find a different way of “making noise about the welfare of sports persons in the country”.

A lot has been said about Team Kenya’s performance at the Tokyo Olympics. Her verdict?

“Our athletes did their best under the circumstances. Qualifying for the Olympics alone was a big win. We don’t appreciate what our athletes go through. We only criticise them when they fail to bring the medals.”

Kenya’s dismal show in sports can’t be blamed on any one quarter, Radull argues. But she has axes to grind with sports managers, fans and athletes.

“We don’t watch rugby league matches, for instance. When attendance is poor, sponsorship is curtailed. When sponsorships are minimal, our players have to take day jobs to sustain themselves. They only play as a side job.’

“It’s different in South Africa, for example, where fans go out to watch matches, corporates sponsor teams in multi-billion shilling deals and players engage in sports exclusively. Their level of professionalism and hours put into the game and ours are nowhere near the same. Back here, we only go after the federations and unions when our teams falter,” she says.

For 15 years, she hosted a talk show with Roy Karuhize and Kieni Githinji, both whom she describes as acutely talented and smart professionals. “We’re family,” she quips.

So, what has the duo taught her about men’s universe. Radull contemplates before noting with a laugh: “That men are less organised than women. Possibly because they take on a lot at the same time. Men such as Roy are too nice to turn down requests. Sometimes they end up forgetting about some engagements as a result.’’

Few of her fans know that Radull has built her career away from sports. She started off as a news anchor and later worked at Reuters and BBC World Service as a reporter. At Radio Africa Group, she held multiple roles.

“I had a day job. Sports is something I did only during the weekend. From 2009, I was fortunate to work with SuperSport. The profile I’ve built around sports has been in my spare time. It’s only in the past 18 months that I’ve been involved with sports fulltime,” she explains.

Still, 12 years in the space is a long time. What still excites her about sports?

“Like every sports fan, I’m excited by the thrill of the fight, the thrill of winning and what humans can achieve. The passion and atmosphere in stadia is phenomenal. Sports is a constant high.”

Her support for Arsenal is as pointed as her resentment for Manchester United. I invite her to talk about the latter. Radull guffaws, before saying: “Why? It’s just banter. I’m into good football. But banter makes sports more enjoyable.”

Sports is supposed to be friendly and is more than mere contests, she says. “It teaches everything you need in life: discipline, hard work, sacrifices. I’m constantly inspired by the sportspeople I interact with. Sports allows you to live a quality, motivated life.’’

This motivation seems to be lacking in her favourite team. It’s been several years since it mounted a meaningful challenge for silverware.

‘“Arsenal was a winning team when I started supporting it. Things have changed over the years,” she admits with an embarrassed laugh. Even so, she is staying put. “It’s too late to change. Football is like family, you can’t disown your brother because they aren’t winning.”

Out of her experiences at BBC, Reuters and SuperSport, Radull says travel has had the most impression on her. “You appreciate how differently other people run their affairs. In sports, you learn about how matches are managed.”

Any specific low moments? Radull says being fired from the BBC was devastating since she wasn’t quite prepared for the financial headwinds she suddenly found herself in. That and a bloodcurdling incident in post-genocide Rwanda.

In 1999, Radull was part of a group of international journalists covering events in the country that was still reeling from the mass murders that had taken place five years earlier.

READ ALSO  MUST WATCH VIDEO: After a failed marriage to a Nigerian man, I ended up leading a very dark life in Lagos —Kenyan lady

“We had gone to witness the public execution of perpetrators of the 1994 massacres. They were to be killed by a firing squad in a stadium,” she narrates. Horrified, one of the foreign journalists bowed. A fatal mistake.

“The crowd mistook us for sympathisers. They charged. I had to hide in the crowd as my colleagues drove off, some injured. We escaped narrowly. It was a chilling moment.”

Leaving the organisation where she built her career was a big deal. Any part of her that found it hard to leave?

“None,” she says emphatically. “The departure began about two years ago. I wanted to be on radio, which is what primarily drove my move.”

At NMG, Radull will have a radio show on Nation FM and a Monday Night sports programme on NTV. Kenya, she says, is still a radio nation, making it a natural platform for her kind of gospel. She’s using the platform to advance what she calls the sports agenda, targeting athletes, authorities and fans “to make them understand their role in sports.

The role of athletes, she insists, isn’t just to train and play. “They must brand and market themselves to attract sponsorship from corporate Kenya.”

She laments that some Kenyan athletes avoid interviews, dismissing them as a waste of time, which hurts their prospects.

“Some aren’t on social media. Those who are don’t engage enough. While visiting other countries, some of our athletes oscillate between training and their hotel rooms. They don’t explore cities to see possibilities.”

“When Messi moved to Paris Saint-Germain this month, he gained 25 million followers on social media in one day. Two seasons ago, Cristiano Ronaldo made more money on social media deals than he made from playing football.”

She notes, however, that it is not only about making money. “It’s about having a direct connection with your fans.” It’s a subject Radull could talk about for hours on end: “I long for the day when Kenyan athletes will make money exclusively from athletics, to fully focus on sports,” she says.

She adds: “We don’t seem to understand our athletes. We don’t care about their welfare. Sports officials are unconcerned. Some use sports management as a platform to get into politics. This needs to change.”

‘My husband has not touched me for four years’