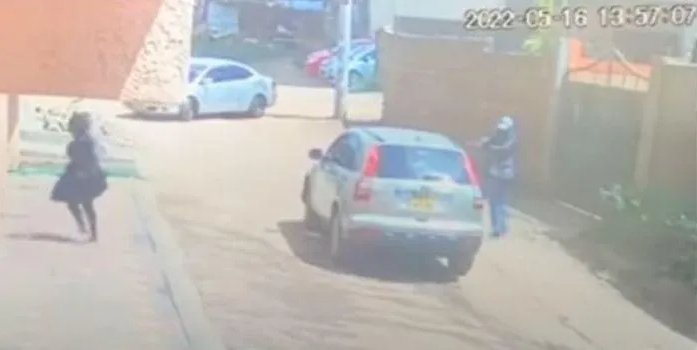 A raw CCTV footage has surfaced showing how a businessman in Nairobi’s Mirema area was cornered  and shot six times at close range.

The victim, who was driving a compact SUV, a Honda CRV in make, headed to his death trap where the hit man was waiting for him.

As he approached the exit, a man in a slightly oversized jacket approaches the victim’s vehicle before a saloon car parked a few meters ahead of him, effectively blocking the exit.

As the victim drove nearer the heavily dressed pedestrian, he (the pedestrian) pulls a gun – a calibre of short gun – and begins shooting at him at close range indiscriminately.

The car is seen trying to move after the first four rounds. The shooter then intercepts it and shoots two more rounds, rendering the driver unconscious and effectively stopping the vehicle.

After that, he sprinted to the waiting saloon car, which took off, leaving the victim for dead.

The video backs up an earlier statement from Kasarani OCPD Peter Mwanzo, who confirmed that the event occurred on Monday afternoon.

Witnesses described the assailant as a well-dressed, clean-cut male. The businessman was the lone occupant of the vehicle at the time of the tragedy, according to the police chief.

Mwanzo further stated that officers from the Directorate of Criminal Investigations (DCI) inspected the murder scene, looking for any evidence like used cartridges and shot casings.

Officers who arrived first on the scene reportedly found several laptops in the victim’s vehicle.