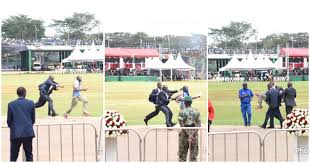 The man is reported to have acted so in a show of protest against President Kenyatta’s leadership whom he accused of “lying” to Kenyans.

President Kenyatta however chose to ignore him and carry on with speech to thousands of Kenyans who attended the fate.

Police acted swiftly to contain the situation by whisking the man out of the venue.

READ ALSO  US pleads with Kenya against refugee camps closure
Related Topics:Madaraka DayNews
Up Next