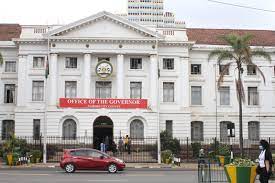 The MCAs reaching the office of Igambi left and proceeded to the City Boss’ office Ann Kananu who was also unavailable.

The MCAs started hurling insults to the absent governor and her CEC for finance that they are not able to serve Nairobi efficiently due alcohol and frequent partying.

Led by nominated ODM MCA Mary Arivisa, the over thirty Repskk told Media that Allan Igambi is the signatory together with Kananu and that they are refusing to sign the salary for reasons best  known to them.

“One of these Igambi’s aides have told us that Governor Kananu instructed Igambi not to release our two months’ salary and that is why he has disappeared from office for over two weeks,” said one of the angered MCAs.

It was established later that Kananu had escaped by whisker through back door to avoid the irate County legislators.

The MCAs have called on president Uhuru Kenyatta’s intervention to restore order and have the MCAs together with the county staffs paid their salaries.

“Some of these workers have families that depend on them, I don’t find any reason why there should be continued delay of salaries every now and then, scandal after scandal at City Hall because of two people,” said Arivisa.

They added that making Kananu the Governor is a mistake they will to regret.