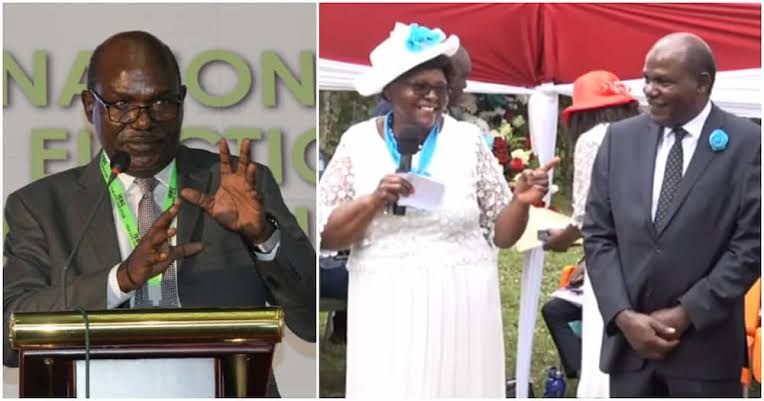 It has emerged that Independent Electoral and Boundaries Commission (IEBC) chairperson Wafula Chebukati’s wife Mary Chebukati Wanyonyi is among those shortlisted for the positions of Principal Secretaries by the Public Service Commission (PSC).

Also on the list are around 20 PSs who served under the Jubilee administration as well as members of President William Ruto’s economic advisory council as well as former Lang’ata MP Nixon Korir.

In July this year, Mrs Chebukati  asked Kenyans to pray for her husband and family as the August 9 polls draw close.

During the burial of her mother on Saturday, Mary shared that her husband’s role in the upcoming polls is crucial for the whole family, because he is at the helm of the polls body.

“As we approach the elections, pray for us as a family. I know my husband wants to follow the law. Sometimes we see him on TV more than we do at home, because of this job. Now that I see him here, I thank him a lot for getting time to put his work aside to mourn with us,” She said.

Mary added that the family was disturbed during the 2017 General Election, which occurred on Chebukati’s first term in office.

“In the other election (2017) our children were very sad. But right now they are energetic, even him (Cebukati), every morning we pray for him, asking God to give him wisdom to serve this country,” she added.

Also on the list are around 20 PSs who served under the Jubilee administration as well as members of President Ruto’s economic advisory council.

READ ALSO  ‘I was sacked from my State job on my birthday,’ Dennis Itumbi opens up

Those who also served in the previous regime include Joseph Irungu, Ali Noor Ismail, Andrew Tuimur, Micah Powon, Simon Nabukwesi and Sarah Ruto among others.

While releasing the list, the Public Service Commission (PSC) stated that they had shortlisted 477 names from 9,154 applicants who had shown interest in the vacant posts.PSC at the same time invited members of the public to give their views on the suitability of the candidates.The PSC said the interviews will be held from October 12 to 22, 2022.