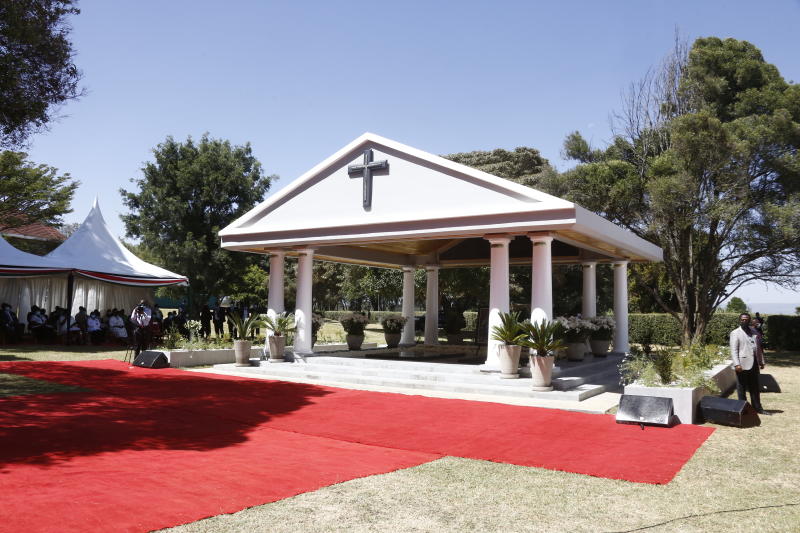 Nineteen kilometres north west of Nakuru town along the Nakuru-Kabarnet road is Kabarak University, which lies on the expansive farm of the late former President Daniel Moi.

After a drive through the university, you arrive at Moi High School-Kabarak beyond which is the heavily-guarded Moi’s home.

At the centre of his compound, dotted with towering indigenous trees, lies his artistic mansion surrounded by flowers of different colours.

Notable in the home is a slight depression behind the mansion where a mausoleum stands in the middle of a lush green lawn.

For the first time, the mausoleum where Moi and his wife Lena were buried was yesterday opened to Kenyans as the country marked the first anniversary of the patriarch’s death.

The mausoleum is an open structure with versatile brown roofing and a golden wood interior finish supported by eight concrete pillars, two on each of the four edges.

Attracting the eyes is the clear marking at the top of each pillar with the names of Moi’s sons and daughters.

As you step in you first get to Moi’s grave, which lies side by side with that of Lena, both covered with a grey plaque with white specks all surrounded by pots of fresh flowers.

On top of Moi’s grave is his name and words drawn from the Bible – Galatians 2:20: “I have been crucified with Christ and I no longer live but Christ lives in me. The life I live in the body, I live by faith in the Son of God who loved me and gave himself for me.”

READ ALSO  No burial or cremation: What happened to Desmond Tutu's body? [VIDEO]

The grave is surrounded by two lines of rectangular tiles made of brown marble while on its left is Lena’s grave with a similar design.

“Happy are they who are in the Lord they shall be comforted in his kingdom. For mother we say goodbye till we meet again at the foot of our creator,” the plaque on Lena’s grave reads, in addition to her name.

Jennifer’s pillar is paired with that of Jonathan, Raymond’s with John Mark, Philip paired with Doris and Baringo Senator Gideon paired with June.

Laying of wreaths was also conducted as per the order, with AIC Presiding Bishop Abraham Mulwa starting off.

In his speech, Gideon said the mausoleum was constructed by a local contractor assisted by Italians in collaboration with Moi’s daughters-in-law.

“The contractor who constructed our father’s mansion is the same one who constructed the mausoleum, Mzee Moi’s and our mother’s final resting place, with the support of Italians. The concept was developed by Zahra, Eunice and Susan,” he said.

Zahra is Gideon’s wife, Eunice is John Mark’s wife while Susan is Raymond’s.

The mausoleum caught the attention of Nakuru Governor Lee Kinyanjui who appreciated the great work done to give the former head of state and his wife a proper resting place.

“The way this mausoleum is built teaches us a lot. It means that the children are the pillars that made the late Mzee Moi’s family stand strong,” said Kinyanjui.