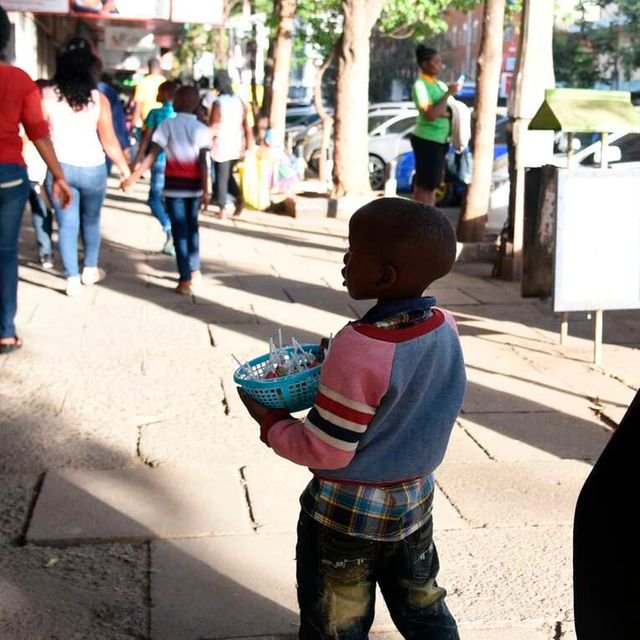 The 8pm curfew in Nairobi descends with confusion and haste. The hurrying, scurrying and rushing to get back home in time can send wrong signals to one not acquainted with the city.

The whole city empties itself out of the central business district at an alarming rate. Thousands are overwhelmed by the speed required to get back to the safety of their abodes.

In this muddle, and with the last-minute commuters seeking transport back home, you will notice children – sometimes unaccompanied by adults – busy hawking.

Nairobi is used to street children who somehow live in the alleys of the city, but these are ‘entrepreneurial children’.

The child will be holding a small peg holder bowl full of candies, chewing gum and lollipops with a modus operandi that can tire even those toughened by the street life. They follow people around the streets incessantly selling their wares.

Though only seven years old, *Cynthia Atieno is a child hawker from Kawangware. A Grade Two pupil in Dagoretti South, she has been hawking since schools closed last month.

“I usually come with my older sister and my mother,” she says.

Cynthia doesn’t have a face mask and it’s too cold for her but she has to be out to supplement her family’s income.

Her sister, 13, is already a veteran, having joined the trade three years ago while in Standard Three. She makes about Sh300 or more on a good day.

Throughout the holiday, she’s been working between 3pm and 7pm. Before the pandemic, they used to hawk between 6pm and 9pm.

“We get the sweets from a wholesale shop at Khoja with our mother,” she offers.

This is the only way they can raise cash for school uniforms and other requirements not covered by free primary education programme.

Tough, but the only way out

*Wafula is also in the streets with his two sisters. They have organised themselves such that each operates in a designated region. Later, they meet outside Nation Centre for the journey back to Bahati Estate where they live with their mother, who roasts maize by the roadside.

They hawk between 1pm and 7.30pm daily since schools closed.

“I started hawking when I was in Standard Three. We sell groundnuts, sweets and chewing gum,” says Wafula, 13. His older sister is 15, while the younger one is 11.

On school days, instead of heading home in the evening to begin their homework, they change their clothes and hit the streets.

“I sold sweets worth Sh220 yesterday. It is tough but this is the only way to help my mother,” he says, adding that there are many other child hawkers.

Like organised groups, they also have their own street rules: No one hawks in another’s turf.

Since hawking is illegal, Wafula has found himself in the cells a few times.

“I was arrested and lost my wares for the day. My mother rescued me after a night in the cell,” he offers.

According to Nairobi City County by-laws, one must have a permit allowing them to sell their wares in designated areas. The permit is, however, non-transferable.

Child labour is rife in Kenya and is mostly perpetuated by parents. According to the Kenya National Bureau of Statistics, children aged between five and 17 in casual employment were 1.3 million out of a population of 15 million in that bracket in 2019.

This placed child employment rate in Kenya at 8.5 per cent.

In 2015, Kayole South Ward MCA Elizabeth Manyala sponsored a motion at the county assembly calling for the arrest of parents who let their children hawk in the streets.

She argued that the children should be in school and claimed they are being used unfairly by adults for selfish gains.

The Cradle and The Undugu Society of Kenya – two organisations working to improve the welfare of minors – have categorised street children into four groups.

The third are those who are in the streets occasionally, such as in the evening, weekends, and school holidays. Then there are the ‘street families’, children born in the streets.

Hawking exposes them to a cruel world that is full of hurt and rejection. As they grow, they embrace a world in which to get their way in anything, they have to use force.

“Such trade also exposes them to emotional neglect as children are supposed to be loved but the moment we let them roam the streets, where there is no love, they grow up with emotional injuries,” he explains.

Worryingly, Dr Kiriinya states that being involved in adult chores makes children begin to worry about their needs so early in life even before they have developed mental skills.

This might predispose them to begin stealing or end up learning other behaviours in the streets if they notice their business is not doing well.

“Somehow they start developing anxieties and worries early in life which can impact them later in life if they find themselves in a state of luck. For them they will not take it as a normal thing as it already means a lot to them because of the experience they have had in the past,” says the psychologist.

Worse, the children could end up developing post-traumatic disorders due to what they experience or witness in the streets.

“In the street, they are able to see other things that children are not supposed to see like someone is fatally knocked by a vehicle or a thief shot by the police. These experiences can cause post-traumatic disorder or experiences.”