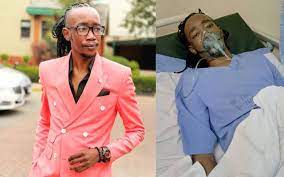 Akuku Danger was hospitalized two weeks ago over an unknown illness. However, he was born with sickle cell anemia.

Thespian Sandra Dacha, who is Akuku’s girlfriend said he was discharged on Monday but the hospital decided to detain him until he pays the remaining balance.

“The hospital has refused to accept collateral so that Akuku danger can organize his finances from outside despite having their collateral from the January bill, which has a higher value than the total bill. Anyone willing to help in any way, please reach us,” she said.

Dacha made the revelations on Instagram on Tuesday as she appealed to willing  Kenyans to help the former Churchill Show comedian.

Recovering Akuku has expressed gratitude towards his fans and Kenyans who are standing with him in his time of need.

READ ALSO  Woman of passion: I quit my job to start a business, months later Covid hit
Related Topics:EntertainmentHealthNews
Up Next

Kenyans to Boycott Elections over High Cost of Living