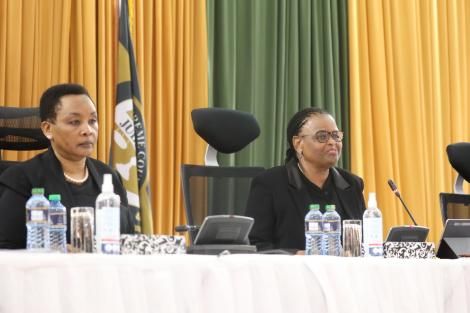 During the Pre-trial hearing, Chief Justice Martha Koome stated that nine matters from the petition have been identified by the court for determination and will be taken into consideration by the parties.

The issues for consideration are:

1. Whether the technology deployed by the IEBC for the conduct of the 2022 general elections met the standards of integrity, verifiability, security and transparency to guarantee accurate and verifiable results.

2. Whether there was interference with the uploading and transmission of Forms 34A from the polling stations to the IEBC public portal.

3. Whether there was a difference between Forms 34A uploaded on the IEBC public portal and the Forms 34A received at the national tallying centre, and Forms 34A issued to the agents at the polling stations.

4. Whether the postponement of Gubernatorial Elections in Kakamega and Mombasa Counties, Parliamentary elections in Kitui Rural, Kacheliba

5. Whether there were unexplainable discrepancies between the votes cast for presidential candidates and other elective positions.

6. Whether the IEBC carried out the verification, tallying, and declaration of results in accordance with Article 138 (3) (c) and 138 (10) of the Constitution.

7. Whether the declared President-elect attained 50%+1 vote of all the votes cast in accordance with Article 138 (4) of the Constitution.

READ ALSO  Muturi: I will run for President on DP ticket

8. Whether there were irregularities and illegalities of such magnitude as to affect the final result of the Presidential Election.

9. What reliefs and orders can the Court grant/issue?