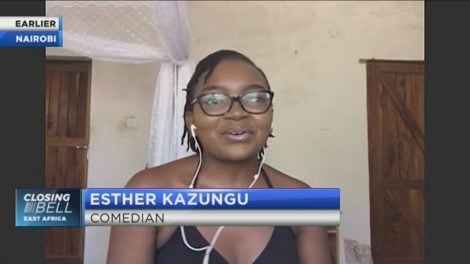 Comedian Esther Kazungu is off the market after getting engaged to her longtime partner James Kibunja at a lovely surprise party over the weekend.

Kazungu famous for her online hilarious skits was tricked by her close friends into attending a birthday party of one of them at a secret location, which turned out to be her engagement party.

“Two of her close friends Naomi Mburu and Linette Muga collaborated with her boyfriend Kibunja. They fooled her into thinking she was going for a birthday party but turned out to be her engagement party. I don’t have any photos yet of the engagement ring but I am confident when I tell you it was an engagement party,” a source privy to the development told Nairobi News.

Kazungu and Kibunja, a renowned emcee, have been dating for some time even though they appear to be ready to invest to have their relationship private.

Even after the only invite engagement party, the couple hasn’t yet shared much to suggest that are preparing for marriage.

From their weekend post and footage, one can only imagine the two had some great fun over the weekend.

Their close friends and other invited guests too were careful not to post any stories that would suggest that Kibunjah proposed.

Kazungu the first rising online comedian became famous when some of her skits specifically about the South African parliament dramas, which went viral.

Death and fundraiser announcement for Robert Ratemo Mayaka of Atlanta