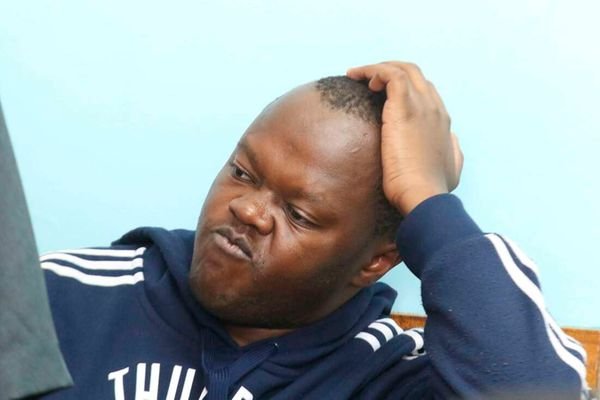 On October 25, 2019, Joyce Syombua and her two children, Shanice Maua and Prince Michael went to the Laikipia Airbase in Nanyuki at the invitation of former Major Peter Mugure.

Their lifeless bodies were a day later hauled out of the military base in sacks, destined for a public cemetery in the dead of the night.

The weekend was meant to be a family bonding experience ahead of a birthday trip to the Coast. At least that is what Syombua, the estranged wife of Mugure, believed when she agreed to make the Nanyuki trip.

Almost two years after the bodies of Syombua, Shanice, 10, and Prince Michael, 5, were dug out of a shallow grave in Thingithu, Nanyuki, the triple murder trial against the former military man has barely made progress, as Mr Mugure has declined legal representation.

Nevertheless, the man who helped bury the bodies has taken a plea bargain in exchange for his testimony against Mr Mugure.

In his confession, Collins Pamba has spilled the beans on the events of October 26, 2019, detailing how he helped the former soldier to sneak three bodies out of the military base undetected.

Today, the Nation can reveal the timeline of events leading up to the triple homicide and a ploy to get away with murder, including an attempt to have the crucial confession withdrawn.

Pamba is now serving a five-year sentence for his part in disposing of the bodies, but the Nation has learnt that Mr Mugure had sent his sister Nancy Mugure to visit Pamba at Kerugoya Prison and ask him to recant his confession.

Pamba will be a witness for the state against the former soldier.

In the confession, Pamba says Mr Mugure had threatened to kill him if he refused to help him bury the bodies of his estranged wife and two children.

A promise to have him enlisted in the military was meant to sweeten the deal. Pamba was a casual worker at the Laikipia Airbase, where his duties involved cleaning the amenities the soldiers used, and he would get side jobs such as cleaning vehicles for senior soldiers.

At 5pm on October 26, Pamba says he received a call from Mr Mugure, who asked to meet him at a hotel in Nanyuki town.

“Major Mwaura took me behind the hotel where he informed me that he had some work which he wanted me to do for him. I asked him which kind of work, however, he did not disclose, but asked me to proceed to Laikipia Airbase and wait for him there. He gave me Sh100 to board a motorcycle,” Pamba says.

He did as instructed, and proceeded to the Officers’ Mess, where he waited for Mr Mugure for more than an hour. At 6:30pm Pamba decided to go home in Thingithu Phase II.

At 10:16pm Pamba realised that Mr Mugure had been trying to reach him unsuccessfully due to network problems and rang him back. He was instructed to meet the former soldier at the Laikipia Airbase.

Pamba proceeded to the barracks where he found Mr Mugure at the parking lot of the residential block. His house was A3, and he asked Pamba to follow him there.

However, he did not open his door but instead opened door number A4, adjacent to his. Senior colleagues at the block were away on official duties at the time.

“On entering room number A4, he locked the door and kept the key in his pocket. I remained near the bed and Major Mwaura proceeded to the bathroom where he tried to switch on the lights but it was not lighting,” Pamba says.

He says that the former soldier used his cell phone flashlight to light up the bathroom and asked him to approach for further instructions.

Pamba, in his confession, says that he noticed a ‘luggage’ in a gunny bag tied with plastic ropes on the bathroom floor.

“After looking closely using light from Major Mwaura’s phone I realised the luggage was the body of a human being because I was able to see plaited hair, white t-shirt, black trouser and the face was facing downwards,” he says.

It was the body of Shanice.

In the bathtub lay another body in a gunny bag and tied up using a rope in similar fashion to the first sack.

Pamba says the second body was inside a gunny bag facing downwards with a shaved head, and wore a green t-shirt with no pants on.

Mr Mugure then proceeded to tell Pamba that he wanted him to carry the bodies to his car at the parking lot.

“I tried to resist by telling him that I would not be able to do the job for him. He informed me that only I and he knew what was inside room A4 and if I would not assist him he would kill me. He further threatened me not to tell anybody about what I had seen and if he heard anything about it he would kill me,” Pamba says.

To sweeten the deal, Mr Mugure promised Pamba that he would get him enlisted in the Kenya Defence Forces and even asked him to make sure he gave him his academic papers.

The spare wheel and floor mats had been removed from the boot, perhaps to create more room to fit all the bodies.

“Major Mwaura closed the car boot and asked me to follow him to his own house, number A3,” Pamba says in the confession.

As was in the first house, the former soldier locked the door as soon as they entered the house.

“I immediately saw the body of an adult female lying on the floor facing upwards behind the chairs. The body was dressed in white trousers, red T-shirt, and the face was covered with a black and white poncho,” Pamba says.

He claims he was instructed to put the body in a gunny bag as the former soldier picked up a rope and tied it up.

“We then carried the body to the vehicle and along the way, we rested eight times as the body was heavy for the two of us. In the car, we placed the body in the boot on top of the other bodies,” he says.

Post-mortems later revealed that Syombua died after suffering injuries to the head from a blunt object while her children were both strangled using a rope.

Mr Mugure then covered the bodies with floor mats before they drove out of the base. The former soldier used his rank in the military to his advantage, allowing him to drive out of the base without raising the alarm.

Out of curiosity, Pamba says, he asked the soldier who the dead people in the boot of his car were and why he had killed them.

“He informed me that the lady was to be married to him as a second wife. He said that this was the lady he loved most and he was to make her his second wife but the lady was not faithful to him as she wanted him to spend money on her and her children,” Pamba says.

Mr Mugure allegedly told his handyman that Syombua was also interfering with his first wife, with whom he had no problem.

The two then proceeded to Thingithu, at a public cemetery used to dispose of unclaimed bodies by the government.

Given the purpose of the site and heaps of soil that had recently been dumped by a road contractor, the cemetery was the perfect site to dump the bodies.

The soldier stopped the vehicle, switched off the headlights, and proceeded to an already dug shallow grave. They were going to use the moonlight and security lights from a nearby school for visibility.

The two men went back to the car and carried out Syombua’s body first and placed it in the grave facing upwards. Prince’s body was next and was placed facing downwards. Shanice was placed in the grave last.

Mr Mugure then fetched a spade from his car and started covering the bodies.

“I assisted him to put the soil back and finally he took the spade from me and finished putting soil in the grave,” Pamba says in his confession.

Once the job was done, around 1am, Mr Mugure dropped off Pamba near his home. He then instructed Pamba to clean up the house and the car.

On the morning of October 27, Pamba reported to work as usual and after his day duties, he went and cleaned Mr Mugure’s house.

They met at 1pm at the Officers’ Mess, where Mr Mugure gave Pamba Sh4,000 and reminded him to submit his academic papers on Monday, October 28.

Pamba did as instructed the following day, as they agreed to stay in touch since the soldier was going on official leave. Mr Mugure also instructed Pamba to keep a close eye on the grave to ensure nobody interfered with it.

“I went there twice and informed him that all was well. After the second visit to the grave, Major Mugure informed me that he wanted me to maintain the grave by adding soil on it,” Pamba says.

The former soldier later sent his handyman Sh1,030 to buy a spade to keep maintaining the grave.

About two weeks later, detectives from the Directorate of Criminal Investigations (DCI) in Nanyuki visited the barracks to investigate the disappearance of Syombua and her two children.

By then, the major was aware detectives were closing in on him and he made a call to Pamba to inform him that police would be visiting the base and he should not be shocked or reveal their secret.

“On November 15, 2019, I saw on television that Major Mwaura had been arrested. I did not inform anybody what I knew,” Pamba says.

On November 16, 2019 at 2pm, Pamba was approached by military police and DCI officers at Laikipia Airbase and interrogated about the disappearance of Syombua and her children. He agreed to show where the bodies were buried.

At 5pm, the bodies of Syombua, Shanice and Prince Michael were dug out from the shallow grave in Thingithu.

In her judgment, Justice Florence Muchemi ruled that she was convinced Pamba had been acting under the instructions of Mr Mugure, the prime suspect in the three murders.

She found that Pamba, as a junior worker at the airbase, had been overwhelmed by the instructions given to him by the senior military officer.

A plea bargaining agreement presented in court signed by both the prosecution and the accused showed that Mr Pamba had agreed to testify against ex-Major Mugure.

This was on the condition that the prosecution dropped the triple murder charges that he was facing and substituted them for the lesser offence of accessory to murder.

Attempts to impeach Muturi will be dead on arrival, says Duale