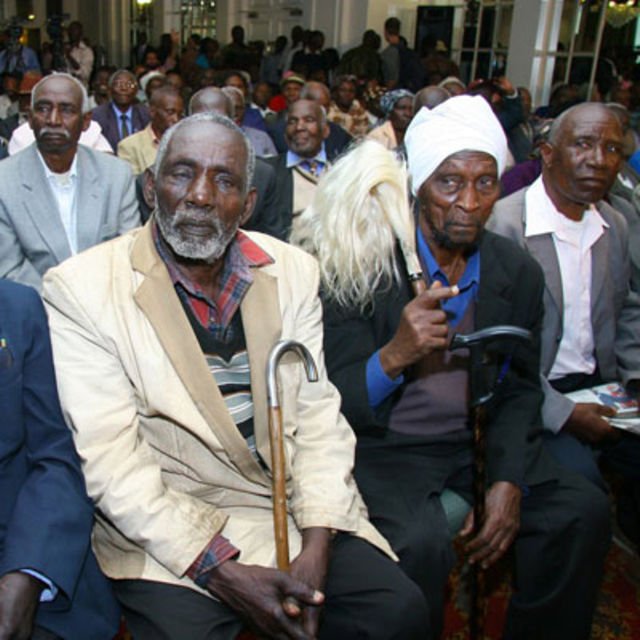 A group of men and women invoking the name of President Uhuru Kenyatta have been conning elderly people in parts of Mt Kenya and the Rift Valley with promises of money and land.

Investigations by Nation.Africa show that the well-organised legion of conmen have divided themselves into regional teams, introducing themselves as coordinators of the Mau Mau solidarity trust and Mega Mashujaa heroes.

In the plot, the fraudsters first identify those over 80 years old and approach them, especially when the government is issuing monthly stipends to senior citizens.

They then lie that the President was keen on a legacy of rewarding Mau Mau heroes and their children with cash and land.

To benefit, the victims are asked to register with between Sh3,000 and Sh5,000, and for land, a share that qualifies one to get two acres per head is worth Sh8,000.

The government pays the elderly in three tranches, each receiving Sh8,000 every four months.

Waweru Gatune nearly fell into the trap, were it not for the intervention of his 64-year-old daughter-in-law Margaret Njambi.

“On the afternoon of August 23 at my home in Gikandu village, I received a delegation of five people — three men and two women — who introduced themselves as the President’s trustees in rewarding Mau Mau war veterans and their children,” Mr Gatune narrated.

He was asked to register for the monetary reward and allocation of land in Laikipia County, where some 50,000 acres have been supposedly set aside for the purpose.

But the streetwise woman demanded to see their presidential letters of introduction or job cards.

“In the registration that they were doing in exercise books, they were asking for elaborate details that struck me as suspicious. Being asked to give out the identity card number, copies of title deeds as well as the Kenya Revenue Authority (KRA) pin sounded like a suspicious data harvesting drive,” Ms Njambi says.

“The mistake that I made was to call our area chief as they watched. By the time I was through with the call, they were nowhere to be seen in our compound.”

William Nyutu, 81, also received such a group in his Kaharati home in Kigumo sub-county.

He was told the United Kingdom was releasing money to compensate Mau Mau heroes and the computed amount to reach each of the registered persons was Sh5.6 million.

“I paid the Sh5,000 registration fee they were asking for. It was a good bet and should the pessimism you are now invoking in this deal turn out to be false, it is a small price to pay in pursuit of those millions,” he told Nation.Africa.

But Central Region Commissioner Wilfred Nyagwanga said reports had been made to authorities about the group.

“We have heard about those people and I want to inform members of the public that we do not have a presidential scheme running in this region of rewarding people with money or land. There is no official programme of that nature,” he said.

If such a programme existed, he said, it would be coordinated by the national government administration officers and registration would be free of charge.

“The President would not demand Sh3,000 to help you. That is a silly ploy being employed by conmen and they should be arrested wherever they are sighted,” he said.

Mr Nyagwanga’s position rhymes with that of his counterpart in the Rift Valley, George Natembeya, who told Nation.Africa that “there are no 50,000 acres being subdivided to reward Mau Mau veterans and their children”.

“Excising 50,000 acres of land for such a drive is a major happening and ordinarily I would be in the know. We do not even have such acreage lying idle waiting to be dished out to people. We are talking of a group of thugs going around rural areas conning people,” Mr Natembeya said.

“Do not pay money to those characters and do not give them your details. The government does not transact business like that and the vulnerability of many victims in such schemes is informed by greed to reap abnormal benefits. How can you fall into the trap of being told there are two acres in this country valued at Sh8,000?”

“I would rather that you first get your facts right. You are talking of a government dishing out more than 50,000 acres of land to some people being registered outside the government system. In essence, you are alluding to a very misinformed plot that the government is selling public shares for the award of land. The government is not a ranching company,” he said.

Career administrator Joseph Kaguthi also told Nation.Africa that he has witnessed the con game being advanced in Nyandarua County.

“The plot is similar to one that was launched in 2014 where some elements started roaming in parts of the Mt Kenya region asking people to register with Sh3,000 for a reward scheme by the President to benefit jua kali artisans,” he said.

“At least a million people registered in the scheme and it ended up being a scam that was being coordinated by a Kandara politician, now deceased.”

Interestingly, some surviving Mau Mau veterans are optimistic that the scheme has a semblance of legitimacy.

Their secretary, Daniel Kamau, told Nation.Africa that he believes the President is pursuing compensation for them from the British government, saying 70,000 members should have benefitted.

“The President must be working hard to leave us at least with some reward. Our lives have been marred by poverty, struggle and difficulties,” he said.

“We have lived thinking that one day we will get some monetary compensation from the government as a token of appreciation from the work we did to save the country from the hands of the colonialists and I am happy to hear we are being registered.”

He regretted that many of his colleagues had died of old age after leading impoverished lives.

Police in trouble over mysterious death of a man in Kangundo