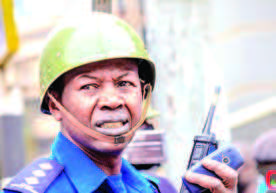 Samir Yunis (right), a controversial former chief inspector for the Kamukunji and Pangani OCS, was detained yesterday on suspicion of abusing his position to abuse female subordinate coworkers.

Samir is anticipated to face a charge of violating the Sexual Offenses Act of 2006’s section 24(2)(a) by abusing his position of authority in court tomorrow.

Detectives from the Internal Affairs Unit (IAU) detained the officer after he honored a summons to appear before the IAU director.

He was processed at the Capitol Hill Police Station for his upcoming court appearance and spent a short time there before being released on cash bail. IAU opened inquiries into Samir’s behavior as a result of many complaints from female personnel.

force them into having sex with him. Those who declined were being harassed and transferred without following normal procedures,” IAU said.

According to reports, Samir has been instigating disciplinary measures against female police officers who have refused to cooperate with him using his connections at police headquarters, Vigilance House. Then, the senior officer’s charges were directed to be investigated by the IAU by the former IG Hillary Mutyambai. One female officer testified about how Samir ambushed and assaulted her when she was in the South B Police line during the inquiry, but despite bringing reports to the vigilance and DCI headquarters, nothing was done.

Others also experienced something similar.

Upon receiving the IAU file, the IG instructed that it be sent to the Office of the Director of Public Prosecutions (ODPP) for assessment of the findings and direction of the case.

In agreement with IAU, the ODPP ordered that the officer be charged.

Related Topics:NewsSamir Yunis
Up Next