Cosmas Korir: How I spent my Sh208 million jackpot winnings 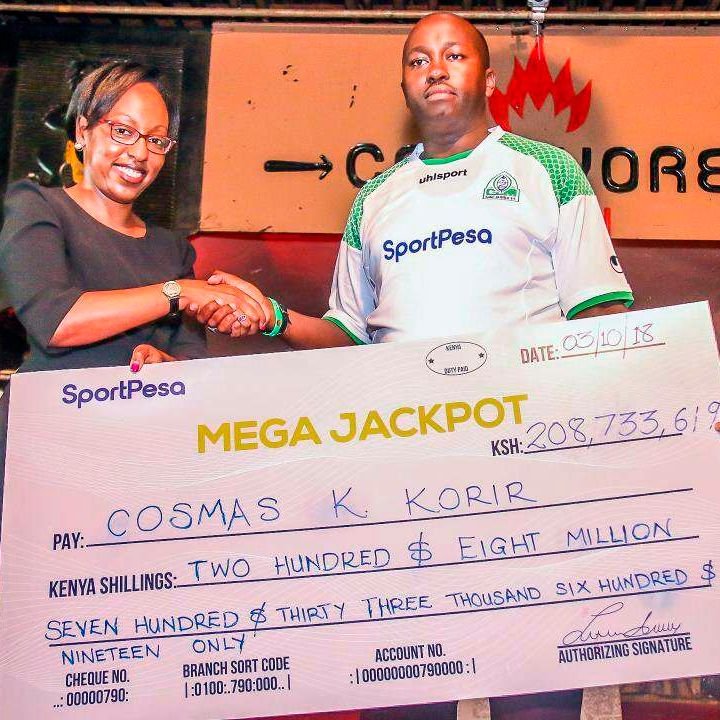 How does it feel to win Sh208 million? Can you imagine it? What do you do first?

Do you change your lifestyle immediately? Do you let the money stay in the bank for a day, a week, or a month?

What would you do? Is this even real? To the six million gamblers who placed their bets daily at the height of the betting craze in Kenya, the weekly Jackpot was the most important show.

A win comes with everything. Glamour. Publicity. Money. This is every punter’s dreamland.

The stories were catchy, the photos charming and the dummy cheques mouthwatering. This was gambling on steroids.

Money was falling from the trees and Kenyans were scrambling for the windfall, placing bet after bet after bet.

For the men and women behind the curtains at swanky offices, this was not betting; this was manna.

The question of winners – especially winners of big money – is a dicey one.

Then there are some like Albert (no second name), who is listed as having won Sh32.4 million in 2016 but never showed up to collect his prize.

There were also suspicious winners, including girlfriends of employees, who raised a storm in the board.

The biggest concern came through the firm’s local subsidiary, Bradley, whose main brand was the Pambazuka lottery.

Bradley was launched in May 2016 and, by the time it closed shop slightly less than two years later, the firm had incurred more than Sh1.5 billion ($15 million) losses, which were written off in the books of Pevans in its 2018 accounts.

An insider, however, says unethical practices were the main reason for its closure.

For example, the spouse or fiancée of one of the employees in the IT department, which was the heart of its operations, on November 1, 2017 won a Sh20 million lottery, making her one of the first people to win.

However, the firm’s CEO Paul Kinuthia, on learning of this win, became suspicious and had the employee immediately arrested.

However, before charging him in court, the company piled pressure on Mr Kinuthia to release the employee to avert a hostile reporting crisis. The money was paid.

Earlier, in July 2017, a man named John Friendrich had claimed that he had won a Sh109 million Jackpot and the media went to town with the story.

The money was, however, not forthcoming, so he sued SportPesa and Bradley. It is not clear what became of the case.

Then there was Mr Cosmas Korir, a Sh208 million jackpot winner.

A Country of Gamblers tracked him down to his Bomet and Eldoret homes.

Mr Korir, who is preparing to run in the 2022 General Election, tells us how he spent his millions.

How I spent the Sh208 million

Korir told the Nation when we visited him at his Bomet home that he got the entire Sh208,765,000 directly into his account. He says the money hit his account as soon as he left Sportpesa offices at Chancery House in Nairobi.

The first thing he wanted was a new car. This saw him buy a Toyota Land Cruiser V8 for Sh12 million. Then he had his two betting friends whom he gave Sh5 million each, adding up to Sh10 million. These friends he says were there with him from the very beginning when he was struggling to make ends meet and helped him to place the winning bet.

He then spent Sh2 million to complete his rural house in Bomet that had stalled having run out of cash. He also cleared what was left of a Sh3.5million loan he had taken to construct his house.

Korir then moved to Eldoret where he bought a flat to settle his family, where they are still living to date. At this time, there were too many unsolicited investment advice from friends and well-wishers and he decided to lock Sh130 million in a fixed deposit account to think and process what he needed to do. After about six months, Korir decided to go into real estate where he bought two flats in Kitengela.

He first bought an entire flat of 86 rooms in Kitengela, named it Double KK. This cost him about Sh50 million and he says if fully occupied, it has a monthly rental income of Sh570,000. But he says the challenges of the real estate sector make it difficult to have full occupancy at any given time and they fetch less.

Seeing how lucrative the first flat was, bringing him about Sh400,000 on a good month, he went back to Kitengela and bought a second Flat. This was a mix of 25 one bedroomed houses and 71 bedsitters, bringing it to a total of 96 rooms.

This second flat cost him Sh65 million and it has an estimated rental income when complete and fully occupied of Sh820,000 per month. He has also invested in machinery, and bought several parcels of land in Eldoret. He does not believe any of the other winners were fake and remains a big Sportpesa ambassador to date.

Being a politician, he is currently building a mansion. Unlike the other winners, Cosmas appears to have gotten the best side of everything. He won big by placing the smallest bet, but also most importantly, he had support from the company and friends on how to spend the money so that he doesn’t end up destitute.

By the time it was shut down, Sportpesa had six big winners and had become an unstoppable betting machine.

It got everything right and, with deep pockets for sponsorships, talented founders and knee-deep connections in the right places, the betting company became a giant.

In addition, with the big money came big jackpots.

As a responsible betting company, it pumped millions into sports sponsorships. It is moments like these that sports fans had been waiting for.

Sportpesa brought everything together – the TV glamour, talented sportsmen and women, and most importantly the much-needed sponsorship.

That was long before trouble knocked on its doors.