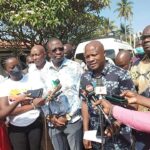 Union bosses have unanimously thrown their weight behind the 12% minimum wage increment announced by the president yesterday.

The secretary-general of the Kenya National Private Security Workers Union Bro. Isaac GM Andabwa welcomed the move terming it as a step in the right direction.

“This is a good starting point and deep being little, it’s an indication that the President has the interests of workers at heart. I’d also like to thank COTU secretary general Francis Atwoli for the good rapport with the government that has enabled the increment.”

Mr. Andabwa also called upon the immediate implementation of the increment of the minimum wage. Kenyan workers will now enjoy a 12 percent increase in minimum wage after a three-year freeze in pay hikes since the last wage review. The increment takes effect immediately. President Uhuru Kenyatta termed the move as an appreciation to workers for their critical contribution to the economy during the pandemic.
READ ALSO  Police took home Sh500M in bribes from recruitment fields
Related Topics:News
Up Next