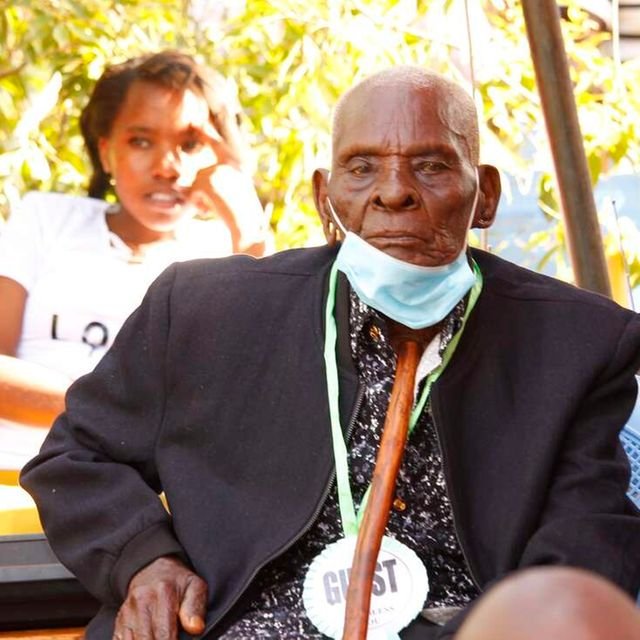 Mzee Nathan M’Amundi unwraps a bundle covered by dry banana barks with ease to reveal its treasured contents — tobacco, a stimulant he has been enjoying for decades.

He places it under his lower gum, savouring the stimulant as he scans the compound where his birthday party is going on.

His national identity card indicates the centenarian from Kirigara, Imenti Central, was born in 1915, making 106 his official age.

Despite his advanced age, M’Amundi has a good memory, eyesight, speech and walks — with little support. The only evidence that he has been around for ages is a bent back and some missing teeth, but he still chews his food comfortably.

While his birth year is documented as 1915, his family argues that he was born around 1901, and on Saturday, they hosted a party to celebrate what they believe is his 120th birthday.

Their argument is based on M’Amundi’s memory of the arrival of the first colonial District Commissioner, Edward Butler, Horne, popularly known as Kaangangi.

M’Amundi recounts that when Horne arrived in Ruiga, he was a big boy herding his father’s cattle.

Saberio Gichuru, a relative, says he remembers that M’Amundi’s old generation ID, which got lost, indicated he was born in 1901.

M’Amundi is a father of three — including two surviving daughters and a lastborn son who died in 1990 at the age of 45 years and would be 76 today.

His firstborn, Esther Kangai, 90, has since lost her hearing ability.

M’Amundi says diet and peace of mind have contributed to his longevity.

He says he stopped drinking alcohol in 1998, and even when he used to drink, he never touched local brews.

Andrew Mbobua, 87, a retired veterinary doctor and Mzee M’Amundi’s nephew, says that despite his old age, the centenarian roasts his yams and prepares tobacco unaided.

He loves boiled food and does not remember when he last ate fried dishes.

“We believe that his old age is a blessing from God as well as his lifestyle. He is a peace-loving man who loves traditional food like yams, black beans and traditional millet porridge prepared by his grand-children. His gourd is ever full of the beverage.

Oldest man in the world

“He’s also a stickler for ethics and is quick to warn us against corruption,” Mbobua says.

When he was given a chance to address the birthday party, M’Amundi walked to the microphone and recounted a bit of his childhood memories before proceeding to advise his grandchildren.

“When Kaangangi arrived, I was a big boy herding cattle. He came through Ruiga (in Central Imenti) and proceeded to Kieni kia Mwitari in Thuura before settling at present day Meru town. I witnessed the clearing of the bushes for the Embu-Meru road, which Kaangangi supervised.”

His greatest counsel to the current generation is to abhor theft and live off their sweat.

“Don’t take anything that doesn’t belong to you. Never do that! If you can’t work with your own hands, you are useless. I bless your hands that they may help you,” he said.

On politics, M’Amundi is clear in his mind that peace is paramount during the political season.

“Horne came to Meru from Embu as a surveyor tasked with mapping out a road around Mt Kenya, which was of special interest to the colonialists due to the region’s favourable climate. If M’Amundi was herding at the time, he must have been over five years old,” he says of himself.

According to the Guinness World Records book, the oldest man in the world is Puerto Rico’s Emilio Flores Marquez aged 112 years.

Terence Creative: Top comedian who was once a street boy