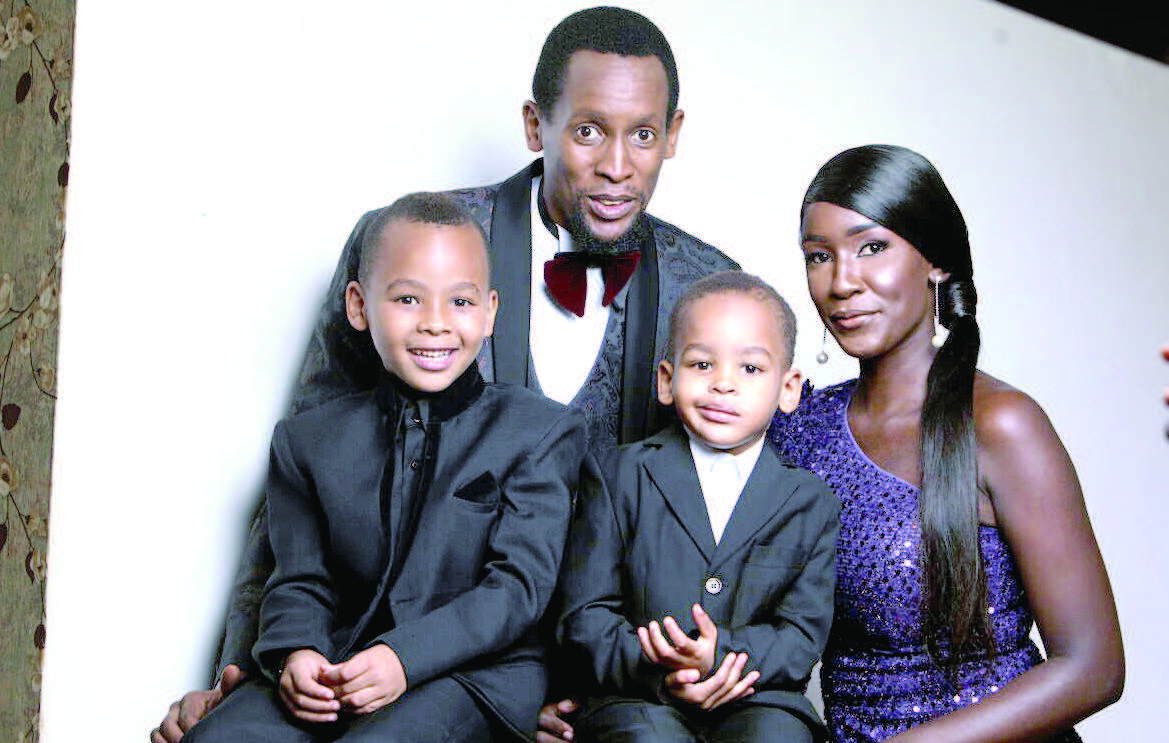 Actor, Daniel Kinyanjua popularly known as Dan Sonko, is not only celebrated as one of the best actors in Kenya following features in films such as Saida, Pete, Klimani Dynasty, Ta Km bi a and several features on music videos, but also being a hands-on dad —raising his two sons after his wife’s passing in March 2017.

Dan’s late wife, Druscillah Mngoda passed on during childbirth after developing complications, leaving behind a newborn and a four-year-old. This was such a low moment for him as a mountainous challenge of caring and raising a newborn by himself lay bare before him. However, help came in the form of love as the family support system stepped in to shore him during this season of loss and pain. When Darrell was born, both Dan’s mum and Dru’s mum stepped in to care for the little one moving in to stay with them for the first one month after which Dru’s mum went back to Nairobi and Dan’s mum carried on with caring of the baby for close to three months. During this time Dan was at least able to carry on with work and tend to

Later on they had an agreement in which Darrel would stay with his grandmother from Monday to Friday and Dan would pick him up for the weekend and would also occasionally take days off. This went on until he started eating solid foods then he moved in permanently. The boys, Djibril now aged eight and Darrel aged four have been their father’s pride and kept him sane while mourning the loss of their mother.

But cupid would struck again in the most unimaginable ways at a time he was so focused on raising his boys and working his career. Love came his way. Again. In the form of Winnie Bwire, an actor, producer, musician and interior designer. Dan and Winnie are currently engaged with a passion and drive to stand for what families are; love. Winnie is also the daughter of former Little Theatre Club [LTC] Chairman, Edmund Kwena.

“We’ve been together for one year and eight months. But we’ve known each other since we were teenagers acting in church plays, but never dated until 2019 for obvious reasons. He got married while I was outside the country for studies. When I got back, we worked together on several projects,” she says.

It was never really the love at first sight kind of story. “When I reconnected with Dan post his wife’s death, he was dating someone else, but it wasn’t working. It was after this period that we connected emotionally for the first time ever. And have been together ever since. About one year into seeing each other he asked me to marry him and I said yes,” shares Winnie.

Winnie describes Dan as a present dad, always open to trying new things and connect with the boys at deeper levels. He is the best father to their boys. The children and Winnie get along well and they have made a lot of memorable moments as a family.

“We have so many memorable moments; When he asked me to marry him, when our boys first called me mum, when we started a food initiative that fed over 1,700 families during Covid-19 pandemic, when we hit our lowest low and still found the strength to stick together, when our parents first met and when we started our own business,” intimates Winnie.

Being a step-mum, Winnie says she does think about being a mama wa kambo, but the society does not fail to remind her everyday that the children are not born of her womb. “I chose to not let it get into me. I already crossed that bridge,” she says.

Just like all other couples, they have had their fair share of challenges. “Discussing finances was a no go zone not just for us, but many couples out there. We learnt the hard way that transparency where money is concerned is a great way to make a relationship work since 70 per cent of the fights amongst couples revolve around this topic. Another challenge we encountered and conquered is communication. We couldn’t understand each other’s languages and now we do. We are on the same page. More cohesive than ever. We found ways to have hard conversations that couples run away from. We are at that place when we can talk about anything and I mean anything,” she intimates.

The 38-year-old makes for a perfect husband and partner. He is open minded and helps with the chores around the house, he is a good listener, positive minded and more importantly, cares about how she feels.

Away from family life, Dan’s journey in the acting industry began in the late 80s when his dad introduced him to LTC. He could not get enough of the performances and wanted to be part of it. He would find himself at the backstage, visiting the control/light box and basically being all over the theatre from a young age. With both their fathers being a huge part of the LTC, Dan and his fiancee, Winnie, go way back in time. LTC has for a long time been marred by infighting and conflicts between management and artistes. So, when Dan openly took to social media to fight against the injustices he felt were taking place within the institution, Winnie shares that this was a move she was restless about as she knew the toll it would take on him and probably on their young family as well.

“To be honest at first, I was enthusiastic and cheered him on. But then, dirty strings were pulled and I didn’t think it was healthy. I nudged him to focus his energies on something more productive and positive where the arts are concerned hence the birth or Creatives Nest foundation. This fight Dan has been on with LTC, my dad has been on it too way long before Dan and I came to be. I saw what it did to my father and there was no way I was going to let that happen to Dan as well,” she shares.

If Dan hadn’t been an actor, he would probably be a social worker. He likes impacting people’s lives somehow. He also enjoys riding his bike .

When I reconnected with Dan post his wife’s death, he was dating someone else, but it wasn’t working. It was after this period that we connected emotionally for the first time ever.

• Dan Kinyanjui was born and raised in Mombasa to Daniel Gikonyo, a rotarian and businessman in Mombasa and Marie Gikonyo, a medical nurse.

• The firstborn of four attended St Augustine’s Preparatory School in Tudor, where he sat his KCPE in 1997.

• He later joined Agha Khan High School where he sat his KCSE in 2002.

• After his secondary school education, Dan joined Kigali Institute of Science and Technology, where he pursued his Bachelor of Science in Computer Science between 2003 and 2006, did a business management course in 2009 at the Kenya Institute of management, and later did a freight forwarders practitioners certificate course in 2010 at Kenya revenue Authority Training Institute.