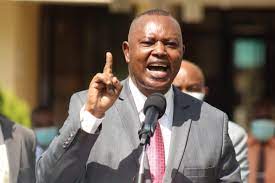 The Directorate of Criminal Investigation Gorge Kinoti has reprimanded Kenya’s Deputy President William Ruto for his interference with the investigatory agency and scheming his arrest for withholding tycoon Jimmi Wanjigi’s illegal ammunitions with an aim to delay or halt investigations against corrupt individuals from his office.

Kinoti has asked Ruto to let him do his job efficiently while Ruto has told public that the DCI Boss is not fit for the position.

He countered the sentiments recently noting that he won’t relent in his pursuit against individuals involved in corruption while dismissing the narratives peddled by politicians against his docket saying it was petty and politically motivated.

The court of appeal temporarily lifted Kinoti’s four-month jail sentence until he was given a fair hearing.

Speaking in an event that brought the investigation agency’s staff and the clergy together he said: “Sincerely you all know the role that I was given by the head of state Uhuru Kenyatta, I was chosen from nowhere, a boy no one knew about. The assignment I was given was not a simple assignment. I have faced persecution and difficulties.”

“These adversities we do follow them but greed has taken centre stage of everything to an extent of cheating the very people we have been given to serve. But because of your steadfast prayers, the Lord has upheld me. Even if I was to go to jail I would rather go for Kenyans and never betray the faith you bestowed on me. Continue praying with me,” said Kinoti.

He added that it will always be his plight to confront public officers and bringing them to justice for the faith and confidence Kenyans have in him.

READ ALSO  My wife moved out of our bedroom
Related Topics:News
Up Next