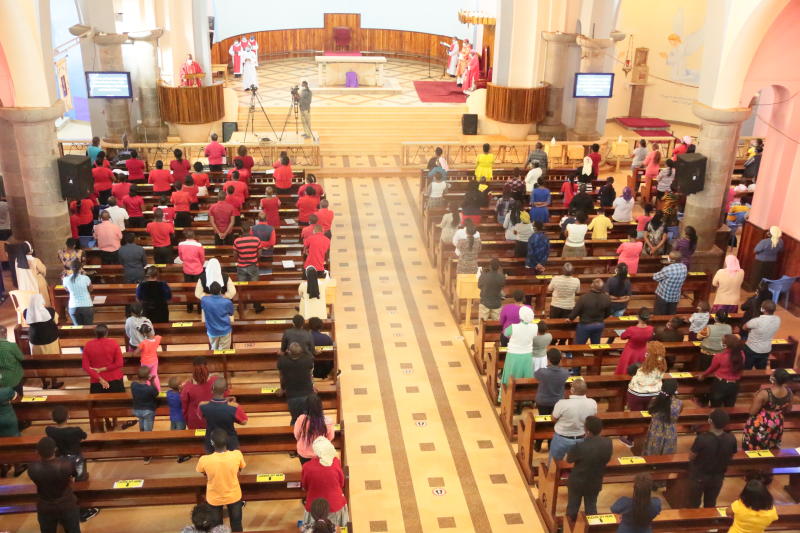 At the iconic All Saints Cathedral this Good Friday, Provost Sammy Wainaina began his sermon yesterday with a reflection of past Easters defined by packed congregants celebrating the most important Christian fete.

Bereft of congregation, the cathedral’s magnificent vaults bellowed his soft preaching to the multitudes watching the virtual service online, drawing parallels of Covid uncertainties to Jesus Christ’s tribulations that brought about the Easter season.

“This will be a very heavy week for Jesus in his passion for our souls yet the most glorious in his resurrection and ascension,” said the Rev Wainaina.

His words, offered as encouragement to his congregation, ring true to the situation that has gripped those entrusted by Christ to spread his message since the onset of the Covid-19 pandemic. They also mirror the adversities with which they have had to contend in the third Covid-19 wave.

Just as Christ went to his people, his link to the mortal world, members of the clergy stand before crowds preaching hope and visit worshippers at home and in hospital to offer comfort. They are called upon to give the final rites to departed souls and intercede for them in the hour of their death.

Their call to service, forged over years of prayer and meditation, dictates that they must shepherd their flock as Christ himself would – keenly and wholeheartedly. They must be in touch with worshippers who depend on them for their spiritual needs.

And it is this nature of their job that places them at risk of contracting a virus that thrives in contact.

Owing to the risks their jobs pose, clerics are listed among frontline workers prioritised in the first phase of the Covid-19 vaccine rollout.

Accounts from several clergymen to whom the Sunday Standard spoke portrays a deadly virus that continues to prey on servants of God working on the frontline to provide spiritual healing.

The two are among a long list of members of the clergy who have died as a result of Covid-19, which includes a Muslim cleric whose death was announced by Health Cabinet Secretary Mutahi Kagwe in May, last year.

The Imam’s death laid bare the threat of a virus that spared no one.

In the same month, the Rev Silas Njiru of the Catholic Church had succumbed to the virus in Italy.

Also on the list is the Rev Peter Kariuki of the Presbyterian Church who died in July last year.

In the wake of the strict containment measures employed to stem the spread of Covid-19, the Rev Kariuki ran a feeding programme for the vulnerable who had been hardest-hit.

Through the initiative, Adopt a Family, he rallied Kenyans to lend a helping hand to those ravaged by the pandemic.

Many more, whose details we have withheld owing to the prevailing sensitivities, have been claimed by the virus.

Within the Catholic Church alone, Covid-19 has claimed eight priests.

The figure was revealed by Archbishop Anthony Muheria of the Nyeri Catholic Archdiocese, who also chairs the Inter-faith Council on Covid-19 in an interview with the Sunday Standard.

Muheria was among the first religious leaders to contract the virus in Kenya late last year. He was hospitalised for more than two weeks.

Among those who have succumbed to the virus include Fr Bernard Njeru Nkanya who served as the Parish priest at St Massimo Parish in Meru diocese.

Others from the Presbyterian Church of East Africa are the Reverend Joseph Muthui from Nyeri Presbytery and the former Secretary General of the PCEA churches in Kenya the Reverend Peter Kania Kariuki.

“The Catholic Church has lost a number of priests and sisters and a number of them are hospitalised,” said Archbishop Muheria in an interview with the Sunday Standard.

His sentiments were also echoed by his colleagues from other denominations.

“Members of the clergy interact with more people than teachers. We have a very good leadership in the government so it’s our prayer and appeal that they be considerate. We also need the vaccine and any other help from the government,” said Bishop Paul Wanjohi of the New Life Church Ministries.

The situation is no better within the Anglican Church, as revealed by the Rev Wainaina, to whom we also spoke.

“While at the All Saints Cathedral we haven’t lost anyone, I know of others that have succumbed to Covid-19 in our Nairobi Diocese and neighbouring dioceses,” said the Rev Wainaina.

A perusal by the Sunday Standard on data from obituarykenya.co.ke, an online obituary platform, and the obituary sections of local dailies revealed that more than 50 members of the Christian clergy in Kenya have died since March 2020 when the coronavirus struck the country.

An entry of the word ‘Bishop’ returns a result of 26 bishops who have died within the same period, 10 of whom lost their lives last month alone.

A similar search of reverends shows obituaries of 12 clergymen who died this year alone. According to the website, at least four pastors lost their lives in March.

Data from the said website lists different causes of death from amongst the various men of God. They range from short and long illnesses, even though the ailments are not specified.

Short illnesses account for most of the reported deaths of persons mostly above the vulnerable age of 58 years. One cleric from the list died in a road accident.

The Covid-19 state of affairs among religious leaders is dire, and clerics admit as much.

“It is not a good situation,” confided Bishop Mark Kariuki, who heads Evangelical Alliance of Kenya.

“I don’t know the exact number of clergymen we have lost as evangelicals… every two days, I see a post that one of us has gone, though I cannot say for sure that it is as a result of Covid-19. But even so, one of us lost is one too many,” said Bishop Kariuki.

“We are losing many people as the Muslim community. We bury as many as seven people per day in Nairobi alone and clerics are not exempted from these challenges,” remarked Hassan ole Naado, the chairperson of the Supreme Council of Muslims, who could also not tell how many Muslim clerics had been claimed by the virus.

The clergy and their followers share a symbiotic bond. Spiritual leaders depend on their parishioners for fulfilment and they, in return, like sheep, depend on their leaders for guidance.

Christ’s death 2000 years ago left his disciples with many uncertainties and, similarly, that of clergy members in the current age presents such difficulties.

“When the shepherd is afflicted, the sheep become wounded. If the shepherd dies, the congregation gets scared,” said the Rev Wainaina, who also narrated his Covid-19 ordeal that had his congregation refreshing their Twitter feeds, desperate to know his condition.

When Covid-19 struck the country, places of worship were shut as a measure to contain the disease. The decision was made in the realisation that gatherings within such institutions were hotbeds of infection.

The government later revised the measures and allowed worshippers back to religious establishments for in-person worship under strict guidelines to curb Covid-19 infection.

But amid a sharp rise of infections within Nairobi, Machakos, Kiambu, Kajiado and Nakuru counties, the president ordered the closure of establishments within the said counties, bringing back the online worshipping method that had gained normalcy for the better part of last year.

“We, therefore, have a greater challenge to find alternative routes and means to come to the aid of our people and offer them hope. This is why we need to protect our clergy and pray that fewer get sick as we need them most,” said Archbishop Muheria.