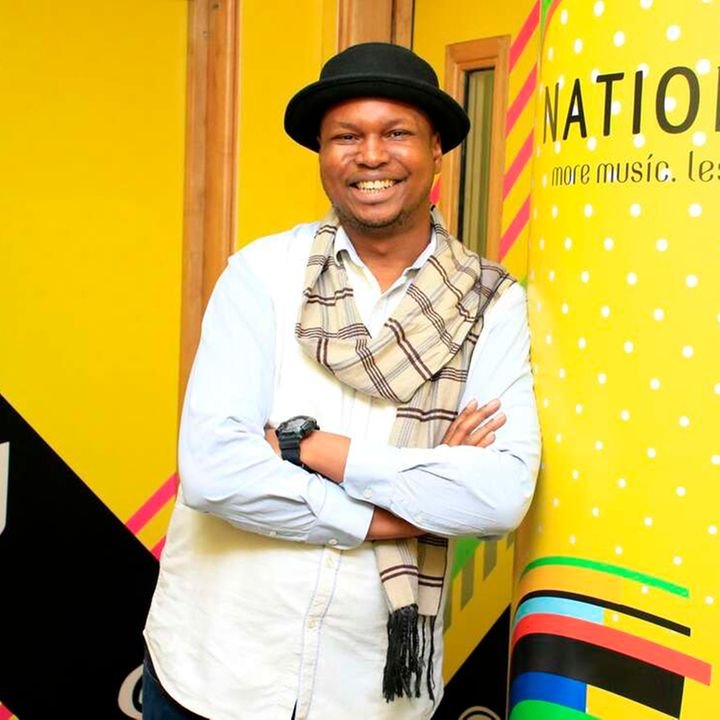 His career as an actor and radio presenter at the time was at its peak. The TV shows and films he was in were doing great and the radio shows were enjoying good ratings.

On the side, he was getting jobs from multiple agencies. A voice-over here, a commercial there or directing a shoot somewhere. Maqbul was all over the place. His brand was growing.

But inside, things were falling apart.

The pressure that came with all the expectations to perform had become unbearable, so much so that he ended up hospitalised for two weeks after developing stomach ulcers.

“Nobody prepares you for the responsibility that comes with fame, no one tells you about these things. The expectations on me were so much. I worked from Monday to Saturday. I was dealing with pressure from TV, radio, marriage, children, clients, agencies and fans. It was too much to take. It was a difficult point in my life because I couldn’t balance all these,” he says.

Being in the arts, Maqbul says, is not a regular nine to five job. It is a full-time job, which most artistes struggle to balance with other aspects of their lives.

When he got better, Maqbul immediately fell into depression, a battle he fought for five years. It was tearing him apart and ripping up his marriage. At some point, he was absconding work at Capital FM, where he was a radio presenter.

“I would wake up in the morning, get in the car, drive to work and park. I’d then turn on the radio, listen to my co-host (Amina Abdi Rabar) then turn off the radio and drive back home. By that time, my wife has gone to work, I get in the room and sleep,” he says.

Perfect time to end it

This went on for some time. When the situation got really bad, he attempted to take his own life.

“I remember going for a party, got high (drunk) and I thought this is the perfect time to end it. I tried taking some pills, but it didn’t work,” he reveals.

Maqbul is grateful to his former boss, who understood his situation and offered help through counselling. He is also grateful for his mother, sisters and mother-in-law for always being there when he needed them.

There is a friend who made a habit of paying him impromptu visits at odd hours, just to have a chat and sometimes take him for a walk or a drive. Most importantly, he is grateful to his wife for persevering with him for the five years he battled depression.

He points out that “depression doesn’t have a face. Depression is happy, chilled, laughing… entertaining people, and you are dying inside. Robin Williams (famous American comedian) went through it, he was the finest person in the room and no one knew he was fighting depression until he committed suicide.”

In July 2019, Maqbul tendered his resignation at Capital FM, bringing to an end his 12-year stay at the station owned by billionaire Chris Kirubi. At the time, a number of companies were downsizing their workforce and Maqbul thought it was the best time to call it quits.

He joined Nation FM in January 2021 as the Team Lead, Radio and Special Projects, and harbours ambitions of taking the station back to its former glory.

“Think of all the big names that have been here: Maina Kageni, Sheila Mwanyigha, Munene Nyaga, Rashid Abdallah, Massawe Japanni, and the list is goes on. The much I can do is get back the station to the level it once was. We are revamping how we do things,” he says.

It’s mid-morning when we sit down for this interview. He has been in since 6am, in a series of meetings and planning the day-to-day operations with his team.

“Such has been my life for over a decade now. I’m always up by 4am. As you may know, I hosted a morning show and waking up early became a habit even when I don’t have a tight schedule,” he says.

Born in Mombasa, Maqbul’s family moved to Kisumu when he was nine and lived there for three years before moving to Nairobi in the late 80s.

His mother was a teacher, actress and model, while his father was a businessman until when he died in 2012.

“Our family is very artsy. My grandmother was a musician, and my mother was an actress and a model. Back in the 70s, they used to have community plays in South Coast and my mother took part as well as modeling for an international brand and fashion shows at the time. I can’t really remember the name of the brand. My sister Thelma studied music and was also into acting,” he reveals.

Maqbul credits Thelma for jump-starting his acting career. Thelma, who is married to Willy Mwang’ombe, the former lead vocalist of Pressman Band (of the “Msenangu” fame), was a thespian at the Phoenix Players and introduced her younger brother to theatre.

“Like every young man, after my high school studies, I was all over the place and my sister decided to get me a job. Phoenix Theatre is what changed my life. I always knew I had potential in arts but had no idea where to start,” he explains.

Before joining Phoenix, Thelma hooked her brother up with a porter’s job at Pressman band where he would earn Sh2,500 a weekend whenever the band played.

“They would play at Grand Regency and Panafric and what I used to do is carry speakers and other equipment to the location and connect them,” he says.

He also got tickets to watch plays at Phoenix and this is where his acting ambition started to burn, coupled with relentless encouragement from Thelma. But Maqbul was a little hesitant.

“She introduced me to my first play back in 1991, called “Aspirations”. The cast had big names at the time, the likes of Charles Kiarie, Jimmy Gathu, Thelma, Mukami Kinoti, Teddy Muthusi and Barbara Guantai. The play had a huge impact on my life; I could not believe that these were Kenyans doing this. I needed to see that,” he recalls.

From that day, Maqbul never missed a single play on stage. And now, he wanted to be on stage too.
One Friday, in 2000, Phoenix Players Theatre placed an advert in the Nation, inviting aspiring actors for auditions.

“Back then, Daily Nation used to publicise plays that were happening over the weekend. My mother is looking at the paper and she sees the Phoenix advert. She tells me: ‘Why don’t you go try and see how it goes?’”

He showed up for the auditions, before a panel of three led by Phoenix founder James Falkland, whom he describes as the “father of Kenyan theatre”.

Ian Mbugua, who later became a famous Tusker Project Fame judge, was also in the panel. The auditions lasted less than 30 minutes.

Maqbul left the hall not sure if he had nailed it, but proud of his efforts.

“A couple of days later, I got a call: ‘This is James Falkland. Maqbul Mohammed, we would like to use you in a role’. It was a quick conversation. I ran to my mother, she could not believe the news. She was super excited.”

With that call, Maqbul started his journey into professional acting, both on stage and on TV. His first play on stage was “The Visit”, (a tragicomedy first published in 1956) where he was cast as a lover boy.

“Phoenix taught us life. Actually, most of the big names that were on the news at the time were from Phoenix and they went to become big shots in the media and the entertainment world,” he recalls.

He worked with Phoenix until 2003 with over 10 stage play casts under his belt, when KBC came calling.

The state-owned station was starting a new TV drama dubbed Reflections featuring a young cast and in which he portrayed Kimani, a young man going through life with his younger sister (played by former TV anchor Terryanne Chebet).

“Reflections became huge; it was one of the first few English shows that actually got proper traction with KBC at the time.”

It is the show that turned Maqbul into a celebrity. Soon, every time he walked on the streets, someone would walk over to say hello or they would shout “Kim!” (Kimani).

When Reflections was abruptly discontinued in 2005, leaving Maqbul a little bit shaken, he got a call from veteran TV producer and actress Naomi Kamau who was starting the Makutano Junctionshow on Citizen TV.

He went on to appear in a number of TV shows and films, including Lies that Bind, Behind Closed Doors, Kwani Readings Weakness, All Girls Together, Auntie Boss and currently Crime and Justice where he plays DCI Boss Kebo alongside Sarah Hassan (Makena) and Alfred Munyua (Silas).

Maqbul remembers 2007 as a very difficult period in his life. Life had been good until the post-election violence erupted.

Makutano Junction, which had been his main source of income, stalled. The creative space was in a shambles, there was no work.

“It was super difficult, at one point, my child did not have diapers and we had to use a leso instead. Things were really tough.”

As he tried to figure things out, Maqbul received a call from his friend, actress Nini Wacera, who was then a presenter at Capital FM.

“She called me for an interview to go and discuss my journey as an actor. It was a late night show she hosted on Thursday,” Maqbul recalls.

The following morning, Nini called again. Her boss at Capital FM had asked her to set up a meeting with Maqbul. The boss was struck by Maqbul’s eloquence and voice. He was eventually partnered with Nini on the late night show.

Then he moved to The Drive Show after its host quit. As time progressed, Maqbul became so obsessed with radio that he put his acting career on hold.

Of his many radio shows and co-hosts at Capital FM, Maqbul he singles out veteran Cess Mutungi as the best he ever worked with.

“I have enjoyed many shows with amazing people, but the one with Cess, that was my biggest. Cess is sunshine from the moment you meet her. I hold her high on a pedestal; she taught me so much about radio. She became family. Cess helped me pick my wife’s engagement ring. When my two children were born, Cess was there. We may not talk for a couple of months, but she is family,” he says.

Maqbul resumed acting in 2014 when Eve D’Souza left Capital FM to start her own production company. She teamed up with Lucy Mwangi, a producer, and poached Maqbul and together, started the popular television comedy Auntie Boss that became a hit on NTV.

“It was such a big hit that Maisha Magic East commissioned a spin off: Varshita,” he notes.

The 40-year-old, father of three has been married for 11 years and has only one word to describe his marriage – awesome!