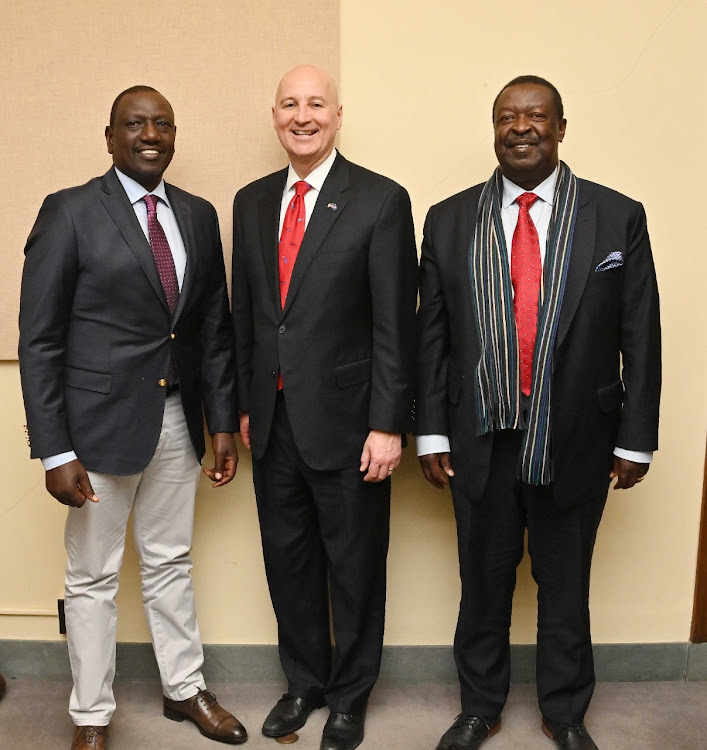 Deputy President William Ruto is currently in the United States, where he is meeting with senior government officials, academicians, and Kenyans living abroad.

One of DP Ruto’s interactions was with Nebraska’s 40th governor, Pete Ricketts, who has been in office since 2015.

Governor Ricketts’ net wealth was estimated to be between $45 million (Sh5.1 billion) and $50 million in a previous report (Sh5.7 billion).

During the meeting, Ruto promoted the concerns of Kenyan farmers, according to WSR Presidential Campaign Spokesperson Hussein Mohammed.

Governor Ricketts was asked by the deputy president to tap into the Kenyan market in order to meet Nebraska’s need for high-quality tea and coffee.

“The State of Nebraska is home to the USA’s most innovative agricultural and livestock sectors. This presents significant opportunities for knowledge, partnership and technology transfer for Kenya. The state is also a potential market for Kenyan tea and coffee,” said the DP in a post on his social media.

Locals have praised the US lawmaker for boosting overseas markets for Nebraska’s ranchers and farmers.

Ricketts is the son of a businessman and a school teacher who founded one of the first discount stockbrokers in the United States. He was born in Nebraska City and raised in Omaha.

The governor is also a co-owner of the Chicago Cubs, a Major League Baseball (MLB) team.

The Ricketts family trust purchased the baseball team from Tribune Media in 2009.

“After graduate school, Ricketts returned to Omaha and worked for Union Pacific before working as a customer services representative in his family’s business, a company that would eventually become known as Ameritrade.

Kenya’s deputy president also reaffirmed his willingness and pledge to secure a peaceful election in August 2022 during the discussion.

At the University of Nebraska, the Kenya Kwanza team hosted an open discussion on technology, sustainability, and food security, where officials addressed areas of potential interest and partnership.