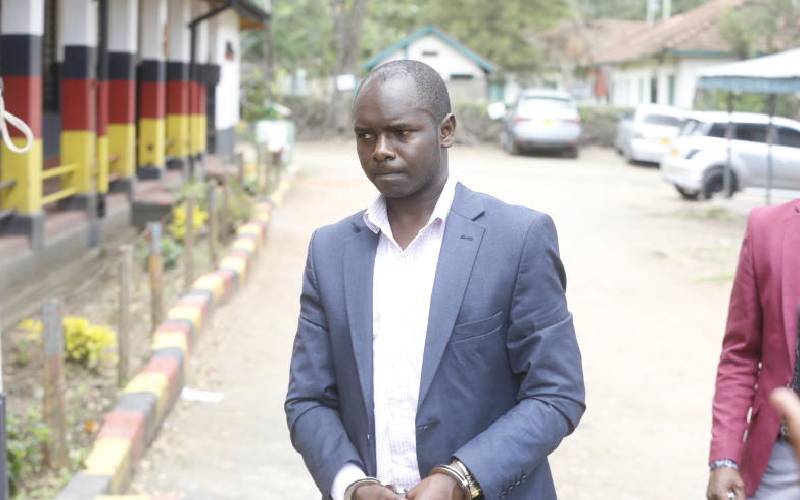 Detectives in Nakuru are holding a man suspected of defrauding the public by pretending to be a judicial officer.

Yesterday, officers from the Directorate of Criminal Investigation pounced on Victor Kiprono Ngeno in Nakuru town after months of trailing him.

“The suspect has been on the run. He is suspected of defrauding the public,” Sunguti said.

Ngeno allegedly obtained money from Samuel Soi by falsely pretending that he was a magistrate and would intervene in expediting the determination of a civil case he had filed at the Nakuru Law Courts.

Further, police claim the man obtained an additional Sh1,564,230 from Soi on the pretence that he was a brother to Devolution CS Charles Keter and would help his (Soi) son secure a job at the Kenya Pipeline.

The Standard established that Soi’s lawyers, Kipkoech Ng’etich and Clement Koigi, were piling pressure on the police to arrest the suspect.

On March 3, 2021, Kipkoech and Koigi, on behalf of Soi, wrote a letter to the Directorate of Criminal Investigations Nakuru seeking to have Ngeno investigated.

In the letter, Soi said he had reported the matter at Nakuru Central Police Station.

He claimed that the suspect told him that he was selling a parcel of land in Njoro and that he could also assist secure employment for his children.

“For the purchase of the land, our client paid the said Victor Kiprono alias Victor Keter Sh700,000 through M-Pesa, and for the employment opportunities, he paid Sh900,000 in cash. A witness was present when he paid the amount,” read the letter in part.

On July 5, 2021, Kipkoech wrote another letter to the DCI questioning why they were yet to act despite the complaints. The lawyer claimed that the police were protecting the man.

On September 13, Kipkoech wrote another letter seeking to know why the police had not arrested Ngeno despite informing them that he had been arrested in Bomet.

The lawyer said they expected the police to re-arrest the man, but they failed.

“We had informed you that the culprit was in police custody in Bomet. But you failed to re-arrest him, and the culprit is now free while our client continues to suffer. The money was his retirement benefits,” said Kipkoech.

Ngeno was arrested by detectives in Bomet in July, moments after making a report at Konoin Police Station that an administration police officer in Sotik had robbed him of Sh500,000.

Bomet County Police Commandant Naomi Ichami said the suspect could not provide any identification showing he was a magistrate.

Ichami said they then found out that he was masquerading, and they arrested him.

The officer named was not known to the police.

Ngeno had told the police that he met the officer who was with a lady at a restaurant in Litein Town. He asked them to drop him at his Belgut home in Kericho.

He claims that along the way, the officer diverted the vehicle and drove towards Mogogsiek trading centre. He then stopped suddenly, and the duo held him down and took the money he had in a brown envelope.

ODM date that never was for Tamasha Restaurant owner