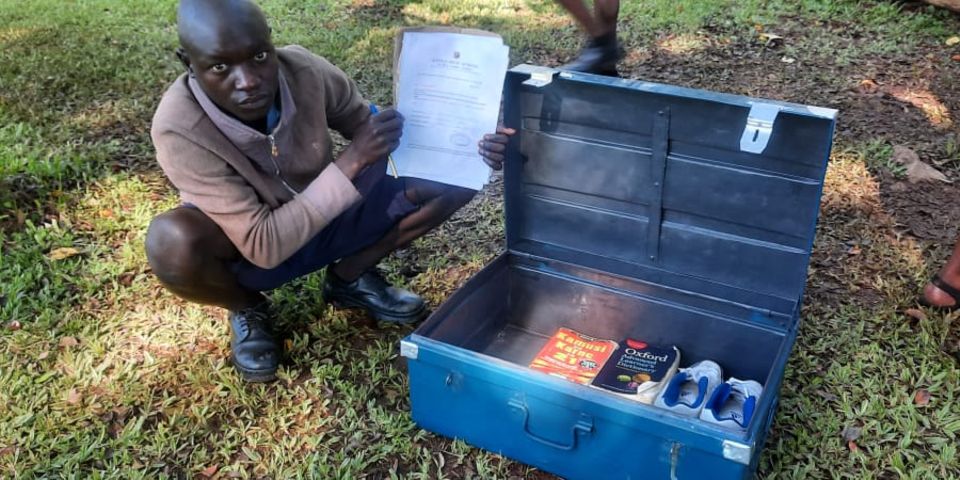 Whereas other students arrived with shopping bags and other admittance criteria, Omollo could only manage a dictionary, Kamusi, and a pair of sports shoes—all of which had seen better days—but pledged that he wouldn’t be taken out of school because he was there to learn.

He also arrived alone because he is an orphan.

While others were being led by parents in long lines to be cleared, he walked to the admissions block with his metal box, thinking about how unfair society was.

Teachers in charge of admissions were speechless when they learned that the new student, who got 387 in the KCPE, was an orphan who was determined to attend school at all costs.

“That’s all I could raise since I have no parent. Even the few books and shoes were donated to me by a neighbor whose son had completed high school,” he told a local daily.

A neighbor also offered him money, which he used to buy the box, and a relative paid for his school transportation.

“I’m not worried of my background as long as I get an opportunity to further my education,” he said.

One of the parents who accompanied his son, Mrs. Sabina Atieno, voiced concern about the situation of the 15-year-old.

“He looks so determined despite his humble beginnings. I hope someone may come to his aid and see him through school,” she stated.

Rueben Kodiango, Kanga School’s Chief Principal, stated the student had been enrolled and that they would give him with basic necessities “as his school fee issue is looked into.”

He’s hopeful that a well-wisher will show up for the youngster soon.

Teachers at St Dalmas Primary School in Rongo Sub-County, which Omollo attended, were pleased that their best student was receiving assistance, however others were worried that it would be disappointing to see their product fail to achieve his goals due to poverty.

Mr Dominic Weda, the school’s principal, characterized Omollo as a “brilliant and focused boy who can go places if given an opportunity. “