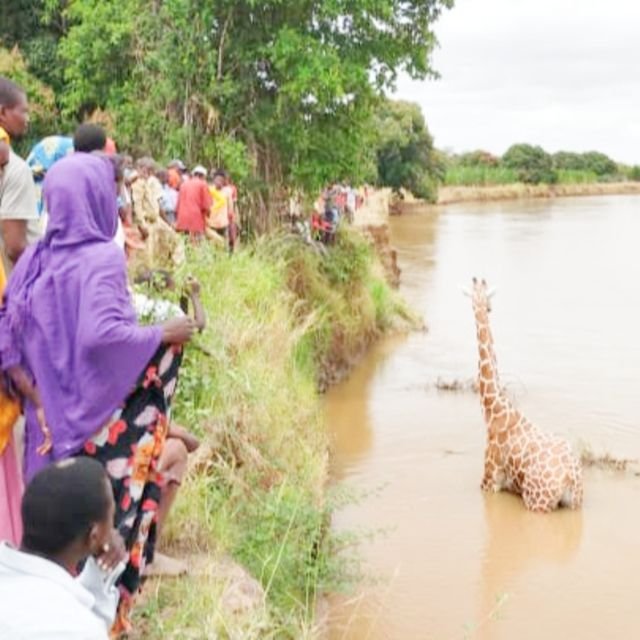 Allegations are rife that Kenya Wildlife Service (KWS) wardens in Tana River County are involved in the game meat business.

This follows accusations that they killed a distressed giraffe, shared its meat and then lied to their seniors that the animal was washed away by River Tana waters.

They allegedly shot the beast dead in Lenda village, slaughtered it and carted away what they could, including skin and trophies.

The giraffe had reportedly strayed far from its territory, fleeing hunger and seeking water in the River Tana, only to be startled by a crowd of villagers who came to watch it cross the river.

But the animal got stuck, prompting residents to call wardens to rescue it from the swampy area.

“We saw the giraffe attempting to cross the river and gathered to witness. It kept going until it got stuck close to the banks. The wardens tried several times to save the harmless animal, but they failed and resolved to kill it,” said resident Kijana Doyo.

The wardens, said police reservist Bakari Omuru, shot the giraffe and with the help of residents pulled it out of the water.

“It was too heavy for them, so we helped them pull it out of the water before they slaughtered it,” he said.

He said the wardens took away some meat and two of the giraffe’s limbs before inviting residents to partake of what was left of the carcass.

It was a dangerous scramble as residents armed with sharp knives fought to take a piece of the giraffe.

Some managed to get prime pieces of meat while others carried the animal’s tail and head home.

But Tana River Senior Warden Augustine Ajuoga said he was given a different account.

Junior officers, he said, lied to him that the giraffe had drowned and was washed away by the river, yet they carried their share of the meat to their camp in Kasarani, Hola, where it was shared among friends and relatives.

“I saw their vehicle parked at that gate, and the giraffe’s leg was quickly offloaded to avoid suspicion,” said a witness, who sought anonymity, at the Kasarani camp.

Orders to rescue the animal

When Nation.Africa contacted Mr Ajuoga for comment on the matter, he said he never gave orders to kill the giraffe and was shocked to see a video clip of residents carrying home chunks of giraffe meat.

“I gave orders to rescue the animal. If the mission proved futile, they should have informed me to issue fresh orders. The officers disobeyed orders and lied to me that the giraffe was carried away by the River Tana waters,” he said.

Under standard procedure, when a wild animal is killed with authorisation from a senior officer, wardens are required to remove for preservation its skin and any other part that is regarded as a trophy.

Mr Ajuoga said he did not receive any of the items categorised under trophies as required but instead the officers lied to him.

The killing of the giraffe has caused an uproar, with conservationists saying it was an act of poaching.

READ ALSO  Alikiba tried but failed to save his marriage

Ali Ngurumo, a conservationist in Tana River, noted that incidents like this one raise questions about the integrity of the wardens entrusted with taking care of wildlife.

“This has encouraged people to hunt wildlife when we are trying to keep them alive for tourism in Tana River. It is quite unfortunate and it should be addressed at the highest level,” he says.

Conservationists have demanded action against the wardens to serve as a lesson for others.

The incident happened just a few months after wardens were accused of abetting poaching after poachers were arrested in the area with 187 carcasses of dik-diks even though the wildlife corridor is heavily guarded by KWS officers from Tana River through to Taita Taveta.