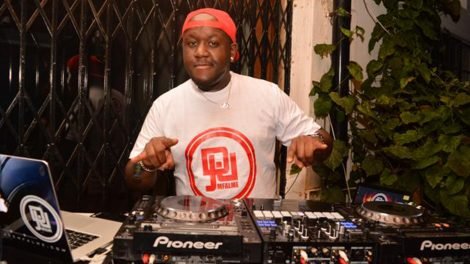 Months after launching his trendy sports bar and nightclub, Joseph Mwenda popularly known as DJ Joe Mfalme has quit his job at Capital FM after 12 years.

The celebrated DJ made the announcement in a statement on Monday thanking the Capital fm for according him the opportunity to hone his craft there.

Mfalme said it was time for him to expand his horizons and that he would soon make a major announcement on his next undertaking.

“I would like to thank the Capital FM Kenya family for giving an opportunity to a young man from Meru who had dreams and ambitions of entertaining people through the art of deejaying. I have made some of my best memories working with Capital FM Kenya and I will eternally be grateful to them for the growth and opportunity awarded to me,” he said in the statement.

The popular entertainer has featured on some of the station’s biggest shows, including the recently canceled Hits Not Homework and the Big Bounce.

He is an award-winning Radio, TV and Events deejay whose career begun over a decade ago when he won the 2008 Pilsner Mfalme competition by beating top deejays from across Kenya.

Since then, Mfalme has been among the most sought-after DJs in the country after headlining countless shows and establishing himself as a media DJ on Capital FM, Trace Africa and K24 tv.

He has performed at various international gigs and worked with top organisations and is also known to play almost every genre of music and connects with his fans through music.

Mfalme prides himself in his hard work, time management and professionalism and in November launched a trendy sports bar and nightclub, The Tap, along Nairobi’s Baricho Road.

In mid-2019, the media house lost a host of its top talents, including radio host Anita Nderu who resigned saying she felt she had given her best and wanted new challenges.

In 2020, Amina Abdi Rabar quietly left the media house a month after another long-time presenter Miano Muchiri also left, and unlike the quiet departure by Amina, he said he was leaving his mid-morning show which he had hosted for more than a decade.

Amina was followed by Joey Muthengi who walked out in December after spending about a year and half at the station owned by billionaire businessman Chris Kirubi.

Muthengi had been hired to replace radio veteran Cess Mutungi, who hosted ‘The Jam984’ for 10 years and this was her second stint at Capital FM.

Others who left the station are Web Editor and lifestyle writer/photographer Susan Wong, who resigned in January 2019 to return to her Canadian home and popular presenter Laura Walubengo, who quit in July 2018.

Others who also walked out were veteran presenters Maqbul Mohammed and My Two Cents co-host Sharon Mundia.
By NN

Related Topics:DJ Joe Mfalme
Up Next

WATCH LIVE ALL DAY: The inauguration of Joe Biden and Kamala Harris

Uhuru says kwaheri to US envoy to Kenya who has resigned