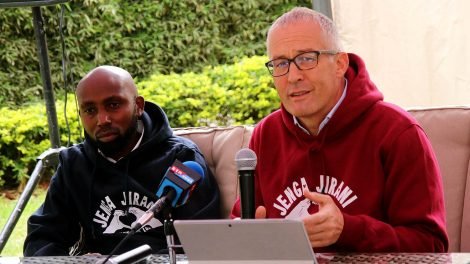 Artist Moses Mathenge, popularly known as DJ Moz, has revealed how scared he was when he went to formally seek permission from their in-laws to marry his better half.

His challenges were best highlighted because unlike in the African culture where the groom’s parents and relatives help the groom with this responsibility, the disc jockey found himself all alone in a foreign land.

“This was an interesting experience for me because here, in my culture, it’s the parents and your uncles/relas who go to the in-laws to ask for marriage. I was scared because I was alone, no crew to back me up, I didn’t know how to do it, and what his response would be,” he explained on Instagram.

The father of three had travelled to Scotland, the United Kingdom where his partner’s family is based.

DJ Moz in a post on Instagram where he shared a TBT photo of themselves from way back in 2008 further reveals his wife’s family knew why he had travelled to Scotland.

They however wondered why he was taking long to ask Deborah’s parents her hand in marriage.

“Her entire family knew why I had travelled to the UK and wondered why I was taking so long to ask 😂 Debs mum, Dad and aunt dropped hints…but I was too nervous 😅,” he said.

After a week in Scotland, on the final day of his visit he got the courage and confidence and popped the question.

“I finally got the confidence on my last day in Scotland. Woke up just before her dad left for work…and I asked him for permission and he said yes 👏🏾 (bravo Moz and good timing) 😁,” he added.

According to Deborah, the two met at an event where DJ Moz was contracted to be the DJ, back in 2005. Deborah was in the country working on a missionary project. They caught up, became friends, close friends and eventually became a couple officially in 2009.

The couple has since been blessed with adorable children; two daughters and a son.