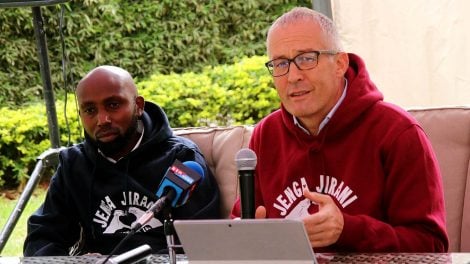 Media personality Moses Mathenge alias DJ Moz has opened up on why he chose to get a vasectomy.

The gospel DJ says he made the decision following numerous discussions with his wife.

DJ Moz, who is attached to the Kubamba Crew DJs argues that the burden of using contraceptives should not be left to women.

“I’m married and I have been for 13 years. The reality is that the burden of family planning had always been on my wife. Na pia mimi nilikuwa ule msee wa CD haibambi (I honestly did not enjoy using a condom), not that there is anything wrong with using a condom for contraception,” he noted.

“My wife had been on the pill for the longest time and it was also not good for her and I knew it was affecting her. She and I had this [family planning] conversation from time to time and we had agreed that it had to stop. We had come to the point where we now had three kids and the cycle had to stop… So vasectomy became an option,” DJ Moz narrated at a forum discussing contraception.

During the discussion, fellow panelist DNG interjected to pose the question: “Have you taken a vasectomy yourself?”

To which DJ Moz responded “Mimi nimewai! (I’ve gotten the surgery) And I’m functioning as normal. Let me say this, I’m glad that at home my wife and I were talking about it, and let me encourage all married men out there to have this conversation with their wives.”

The discussion follows a heated debate after former radio presenter Nick Ndenda revealed that he had done a vasectomy.

This was after he announced his breakup with his seven-year wife Muthoni Gitau.

In a series of posts on Twitter, Nick said that Muthoni did not make him undergo the procedure after many Kenyans trolled him after their breakup.

“One final thing on this matter, I did not get a vasectomy for her. I did that for me because I also do not want kids. Any other questions, not up for debate or discussion,” the post read.

Did police kill her while enforcing 7pm-4am curfew?