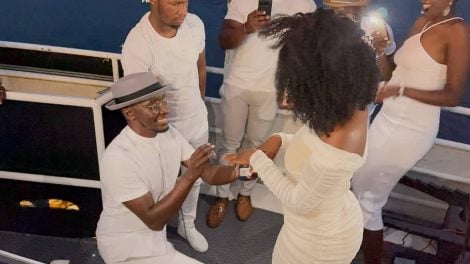 Steve Nyaosi, alias DJ Shinski, a popular Kenyan disc jockey based in the USA is off the market after proposing to his longtime girlfriend Anne Mongari, aka DJ Mochi.

DJ Shinski proposed to his fiancée during an all-white boat party held in Minneapolis, Minnesota at the weekend.

“She said yes!! 💍,” DJ Shinski wrote on Instagram. “I’m so happy to have found someone to spend the rest of my life with @mochibaybee.”

An elated DJ Mochi also took to social media to share the good news, saying she is happy to spend the rest of her life with someone she loves.

“…I’m at peace knowing that I’ll be doing this thing called life with my best friend @djshinski. It’s even special at the right time. GOD’S TIME. Thank you all for your kind words. You’re a family to us and we truly appreciate you all,” shared DJ Mochi. The two are based in the US where they met and began dating a few years ago.

Dj Shinski was born and raised in Nairobi before relocating to the USA after completing high school at Highway Secondary School in Nairobi in 2006, after her mum won the US Green Card lottery, which allowed her to bring the family to the US.

He began his career more than five years ago in Houston, Texas where he gained a name for himself.

DJ Mochi has three years of experience in deejaying and is becoming a household name and already breaking borders in the US.

READ ALSO  Painful goodbye for mother whose sons were lynched

Why Many People Get Denied Student Visas To The USA Part_2.