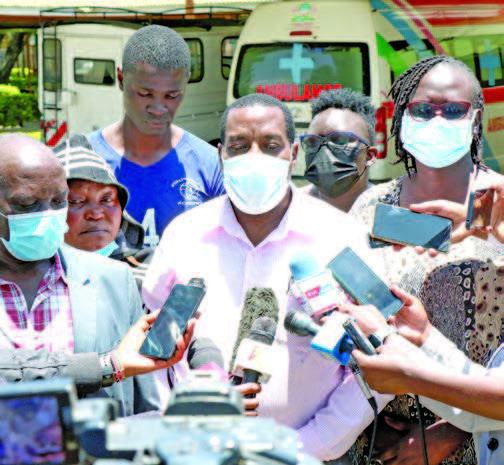 Details of the last conversation between the Nakuru-based doctor, who is accused of killing his two children and attempting suicide, and his wife have emerged.

Relatives yesterday revealed details of Dr James Gakara’s last conversation, via WhatsApp, with his wife, Winnie Odhiambo, hours before he was found lying unconscious in his house and the bodies of his two children, aged five and three, that fateful Saturday night.

Nothing in the messages would have betrayed the tragic events that unfolded hours later leaving Winnie mourning her two children.

In the WhatsApp conversation, Gakara sought his wife’s views on the best place to take the children for lunch on the fateful Saturday. She had replied and even suggested a good place to take them.

Winnie was away in Nairobi finalising her paperwork ahead of her admission to Jomo Kenyatta University of Science and Agriculture (JKUAT) in Juja, Kiambu County.

“That very morning, they were chatting on WhatsApp and had even planned a trip to Thika on Sunday with his last message to my sister being: ‘Don’t come over, the children and I will pick you in Juja on our way to Mary’s place,” Gakara’s sister in-law Roseline Odhiambo revealed.

She maintained that nothing in the messages suggested a troubled marriage as alleged in some quarters.

“I’m not aware of any differences between the two. When we visited him at the ICU on Tuesday, my sister was even praying her husband could recover so that he explains what happened,” she said.

She said the children—Dylan Gakara, 5, and Karuana Gakara, 3—were happy souls who loved their father so much, adding that they were still yet to come to terms with the incident.

“He was just a good man who loved my sister and the children. I was close to him and he did not disclose to me that there was something wrong with his marriage,” Roseline added.

Phone switched off
It, however, emerged that Gakara did not take the children out for lunch as he had promised, but instead, asked the house help to go and get food from the farm, according to the family spokesperson Burton Njoroge.

Winnie said she got concerned when his clients started calling her asking about his whereabouts, prompting her to call him. She said Gakara’s phone was switched off, forcing her to ask one of their employees at the clinic to go to the house and check on her husband and the children.

Njoroge added that the employee, upon reaching the house, peeped through the keyhole and spotted Gakara’s spectacles on the table.

Suspecting he was in the house, the employee called Winnie, who in turn alerted the police. Police soon arrived at the scene and broke down the door, only to discover the children’s bodies. Gakara was still alive, though in critical condition.

Roseline dismissed reports that the couple had quarreled over her sister’s plan to travel abroad for further studies, leading to the tragic events. Addressing the press at the Nakuru hospital yesterday, she termed the claims as untrue and malicious

adding that her sister had just enrolled for weekend classes at JKUAT.

She added that Gakara loved his wife and children so much to a point that he always wanted his wife to further her studies. She even encouraged her to enroll for a degree course at JKUAT so that she assist her at the clinic, she added.

“Winnie, who is a clinical officer at a local dispensary doesn’t even have a passport, you can confirm that at the Immigration department,” she said.

As Roseline spoke, her sister was receiving treatment at the Nakuru Level Five High Dependency Unit after collapsing upon learning of her husband’s death.

Winnie, in a post on her social media pages, expressed regret that she could not save her children from the jaws of death.

“My heart is shattered; I failed to protect you my loves. The person you trusted the most betrayed you my darlings, I promise to fight for justice for you; Go well my sweethearts,” she said.

Yesterday, Nakuru County Police Commander Beatrice Kiraguri said they will await post-mortem results before opening an inquest into the deaths.

“We have received the news of the demise of the doctor who was regarded as our prime suspect, we are awaiting results for further action,” she said.

• Postmortem: A postmortem on Gakara will be conducted tomorrow (Thursday).

• Winnie, is a clinical officer at Langalanga Dispensary in the county.