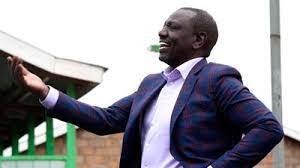 Kenya’s Deputy President William Ruto says he will respect the law and will no longer give the generous donations, which his visits have become associated with.

Speaking on Sunday in Vhiga County,  Ruto said it is now against the Elections Act for politicians to make the donations.

He and the Kenya Kwanza team had attended a church service at Mwichio Anglican Church of Kenya in Emuhaya constituency.

The presidential aspirant said that he had been informed of an ongoing project at the institution and expressing regret that he wouldn’t be able to participate.

“I will make make my contribution after the August 9, 2022 polls,” he told the congregation

In December 2021, Independent Electoral and Boundaries Commission (IEBC) Chairman Wafula Chebukati had announced that a politician found violating the rule will be disqualified from the elections.

“Aspirants cannot participate in fundraising either by themselves or proxies within eight months to the election period, being December 9, 2021. The import is to curb aspirants from influencing voters by donating funds and monies for support,” Chebukati explained.

The politicians can however conduct fundraisers for their campaigns.

READ ALSO  Why peace is elusive in Kerio Valley
Related Topics:HarambeeNewsRutoUDA
Up Next

Join 116,855 international volunteers & make a difference around the world