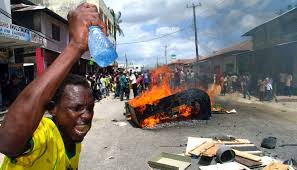 The MP accused Raila of being the mastermind of the violence in the Country.

He said all this will come to an end in August 9.

“The certified lord of violence has exported his vile ways to the Northern region and people rebuffed the agent of division. They have no time to listen to messages of hate and gory tales that add no value. ,” he tweeted.

Chaos started after supporters of the UPIA governorship candidate, Pious Yattani clashed with Governor Ali Mohamud’s supporters as both camps fought for space near the dais.

Raila, his running mate Martha Karua and Wiper leader Kalonzo Musyoka led the Azimio team in the area for campaigns.

Things got out of control after the group started hurling stones at each other with some hitting the dais where the Azimio leaders sat.

The Treasury CS Ukur Yattani had taken to the podium when the chaotic incident erupted.

Duale said the people of Marsabit are smarting from high taxation, high cost of living and reduced revenue allocation, which he also blamed Raila.

“The people are pressed and heavily weighed down by exorbitant taxation, high cost of living, reduced revenue allocation and representation through your BBI fraud and paralyzing insecurity” he said.