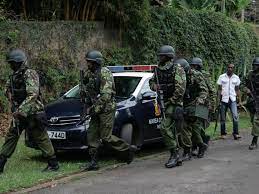 The body of Recce Squad officer Samuel Ngatia who committed suicide at his house has been moved to Kenyatta University Funeral Home and is awaiting autopsy.

It was disclosed by Kays Police station in Kiambu that Ngatia who was attached to the elite presidential escort unit died by suicide in a bizarre incident in his house.

The incident was reported under OB No: 09/11/04/2022 at 1043 hrs, read, “It was reported through a telephone call by the in-charge Presidential Escort Unit Kenyatta Road camp map ref. BJ **** about 4 km west of the station that there was an incident of suicide at the said camp.

Police officers visited the scene and established that PC Samuel Ngatia had committed suicide by shooting himself on the head where the bullet entered on the right side and exited on the left side of the head.”

The probe was done by a team of officers led by Aggrey Adoli with a view to establishing the causes and also remedial actions.

The motive behind the incident is yet to be known and police are conducting investigations.

He was alone in the house within the General Service Unit’s Recce squad camp along Kenyatta Road at the time of the incident and used pistol to blow up his head.

“He did not look stressed when we met last Friday and we are waiting for word from the police on the incident,” said a close relative.

Massive Boost for Ololtua ahead of UDA Party Primaries