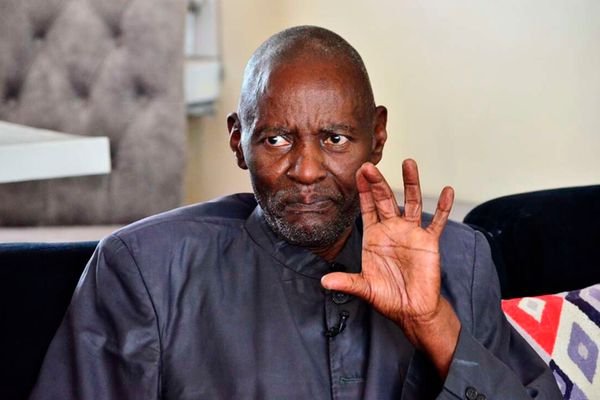 After weeks of calls, we finally agreed on an interview date with Dr Joe Muriuki.

Like many other heroes, he does not wear a cap. His fetes are not new to these pages and other media, but they never run stale. His tale is one of those that stand out and find itself in the history books.

It all started in 1989, five years after Kenya reported its first case of HIV/AIDS. As a young brave man, he took the bold move to publicly announce his status.

Since then, his positive attitude towards life, he says, is the secret to reaching where he is today.

We find him seated on a bench in front of a shop near where he lives. He had been waiting for us there to direct us to his son’s home in Ruiru where the interview would be conducted.

“I live here with my son. He has been taking care of me ever since I learnt of my new condition,” he tells Healthy Nation.

Dr Muriuki brings us up to speed with his ailment; oesophagus cancer. Despite living with HIV/AIDS for over 36 years, he has never had any serious illness. This is because he always took his doctor’s advice and never failed to take his antiretroviral drugs (ARVs) to reduce his viral load and keep off any opportunistic diseases.

However, what started as a swallowing problem in February last year has now changed many aspects of his life.

The energetic lecturer, who weighed about 87 kilogrammes before he was diagnosed with cancer, lost about 33 kilogrammes. He also moved from his home, to his son’s and temporarily stopped lecturing at a university in Kisumu where he used to teach public health and opted to teach in Nairobi, albeit virtually.

Swallowing anything now is a painful experience, but he has to contend with it.

“Cancer is intensive and expensive. It comes with a lot of unexpected challenges that I now have to live with,” he says.

Height of the pandemic

When the pain started, Dr Muriuki persevered for about a month before seeking medical attention.

When he finally decided to go to hospital in April last year, Kenya had already recorded a few Covid-19 cases. The disease was fairly new in the country but in other parts of the world, as it remains to this date, the old and people with pre-existing conditions were said to be the most susceptible to the severe form of the disease. At the time, because of misinformation and stigma, people shunned hospitals.

“When I went to the hospital, I had to take a series of tests, especially in the throat area. It was then that I was diagnosed with cancer of the oesophagus. I was told that the cancer had affected about 12 centimetres of my oesophagus,” he says.

The oesophagus, which is sometimes referred to as the gullet or the food pipe, is a tube that connects one’s mouth to the stomach. It is usually about 20 centimetres long, which means about half of Dr Muriuki’s food pipe had been affected.

“Immediately after being diagnosed, I was put on an intense one and a half months of radiotherapy – everyday. At the same time, I had to go for chemotherapy once a week,” he narrates.

All this was happening at the height of the pandemic.

Dr Muriuki says he had to take extra caution as he knew that breaking or bending any public health measure would definitely mean trouble for him.

“Already, managing two infections is such an uphill task, I couldn’t risk joking with Covid-19 rules that had been set by the government. I can hardly forget washing my hands even to date,” he says.

Even so, he is bearing the brunt of expensive healthcare in the country, something that the Universal Health Coverage plan could help to solve. Its achievement remains hazy as Kenyans like Dr Muriuki struggle with hefty hospital bills.

“Treatment for cancer is damn expensive in this country. A session for my radiotherapy costs about Sh3,600. My weekly chemotherapy made me cough up about Sh10,000 each time I went in for a session. I still had other miscellaneous expenses each time I visited the hospital. It was even worse during the pandemic as I had to avoid public transport to get to hospital,” he says.

When Dr Muriuki learnt that he had cancer, his medical cover from National Hospital Insurance Fund (NHIF) was not up to date. By the time it matured to make him eligible for payment of his expenses, his first phase for radiotherapy and chemotherapy had elapsed. That means that he footed the bills for all the sessions he went for out of pocket.

Even with all the chemotherapy and radiotherapy sessions he has had, he still takes about two to three hours to take a meal.

“I have to chew food until it becomes almost watery. I have to be very careful because if I swallow anything solid, I vomit,” he explains.

He adds: “I have to take my medicine every day but I cannot swallow them as I used to. Instead, I crush the medicine, dissolve it in water, or porridge, sometimes juice and then swallow. It is usually very difficult, but I have to contend with it – I can’t survive without ARVs or septrin,” says Dr Muriuki.

To save him from the pain of swallowing, the doctors advised him to insert a medical gadget called a stent to open the already narrow oesophagus area that made him struggle with ingestion. This is done surgically by the doctors.

“Without it, I’d not be able to swallow. It cost me about Sh50,000 and reviewing it, which is necessary, will cost almost the same amount,” he says. “You see, I told you, cancer is very, very, expensive.”

When he was going through his first phase of chemotherapy and radiotherapy, Dr Muriuki noticed a loophole in the government’s healthcare system that he hope will be sealed soon.

“I had to come all the way to Nairobi to get the services at the Kenyatta National Hospital. I wonder what happens to people deep in the village. Even when getting to the hospital, you have to ‘fight’ like anybody else, regardless of your situation, to get access to a doctor,” he says.

“NHIF really needs to take care of cancer patients. In hospitals, if you don’t have even a shilling, you will not be treated. You have to pay all the money in full, and that has to be done upfront,” he explains.

While he is battling the new condition, he says he intends to maintain his can-do attitude, the same way he handled his HIV/AIDS diagnosis.

With his conditions putting him at risk of getting a severe Covid-19 illness, he says that he is fully vaccinated and would advise anyone living with HIV to get the Covid-19 jab as well.

“I am 62 and very eligible for the Covid-19 jab. When people were still debating whether to take the jab or not, I was the first in the queue to receive it. It wasn’t a debatable kind of thing for me. I knew that I needed it more than anything,” he says.

He goes on: “People react to your condition the way you condition them to; everything is infectious. If you are positive about something, it will radiate to your environment. The vice versa is also true.”

He recalls how scared people were of HIV when he first came out in 1989.

“It was so bad that people thought they’d drop dead when they contracted it. I didn’t have any negative thoughts about myself at the time.

“You know, I struggled with the infection from 1986 without knowing. I only went for the test after three years and the doctors told me I had about three months to live. I did not let their thoughts of me define me,” he says.

Many years of ARVs

Dr Muriuki has been on ARVs for about 10 years now. In the earlier years, from when he was diagnosed, the drugs were not as accessible as they are today. He tells Healthy Nation that he has lived to see about three phases of the HIV epidemic –stigma, campaigns on prevention and the use of ARVs.

READ ALSO  Shock in Murang’a as body of pupil, 13, found by mum in bedroom

“I embraced positive living way back and it has been a big plus to my journey. Surprisingly, my viral load has been stable throughout the years. When ARVs were introduced in the country, I was always the first in the queue to get them and that is why I have managed to stay healthy for a long time,” he says.

He remembers days that people living with HIV fell victim to people who purported to have a cure. A case in point is the infamous Tanzanian self-proclaimed healer Babu wa Loliondo, who died in July this year. His “miraculous cup” caused more harm than good as people who had been on ARVs stopped taking them with the hope of getting healed after drinking his concoction.

To date, there is no cure for HIV/AIDS. Scientists have been trying to create vaccines but most of the vaccine candidates have fallen short, the latest one being the Imbokodo trial that was being tested in women who risk being infected with HIV in South Africa. The trial failed because of low efficacy levels, which were half the required clinical trial threshold of 50 per cent.

“You see, as long as we do not have a vaccine or a drug to cure HIV there is no way that you are going to run away from your shadow. Acceptance of HIV/AIDS is the first thing, and it will go a long way,” he says.

It is quite unfortunate, Dr Muriuki says, that during a pandemic, there was a tug of war surrounding the supply of important drugs for people living with HIV.

“ARVs, in my opinion, are the miracle that brought down HIV. When we now have shortages, it means that we are reversing the gains that we have made over the years.

“For instance, during the shortage, instead of getting six-months worth of medication, I could only get enough for one month. When I asked, I was told that they were rationing so that everyone could get the drug. I hope we will not have that challenge again,” he says.

According to the lecturer, there is need to scale up administration of ARVs and the government should ensure that those who are yet to embrace them are brought on board. This, he says, will help the country achieve the global commitments towards ending HIV/AIDS by 2030.

Dr Muriuki warns the younger generation to take precautions to avoid getting infected with HIV.

“It may look like there isn’t so much danger but there is. In the end, you will fight the disease as an individual,” he says.

He advises organisations like the National Aids Control Council (NACC) not to tire from changing young people’s perceptions of HIV/AIDS.

“It is important that NACC and other organisations take time and change young people’s attitudes. If not, ignorance from the upcoming generation will reverse the gains made so far,” he says

Related Topics:Dr Joe MuriukiNews
Up Next