Drama as Kimilili students go on rampage over 'cruel' prefects 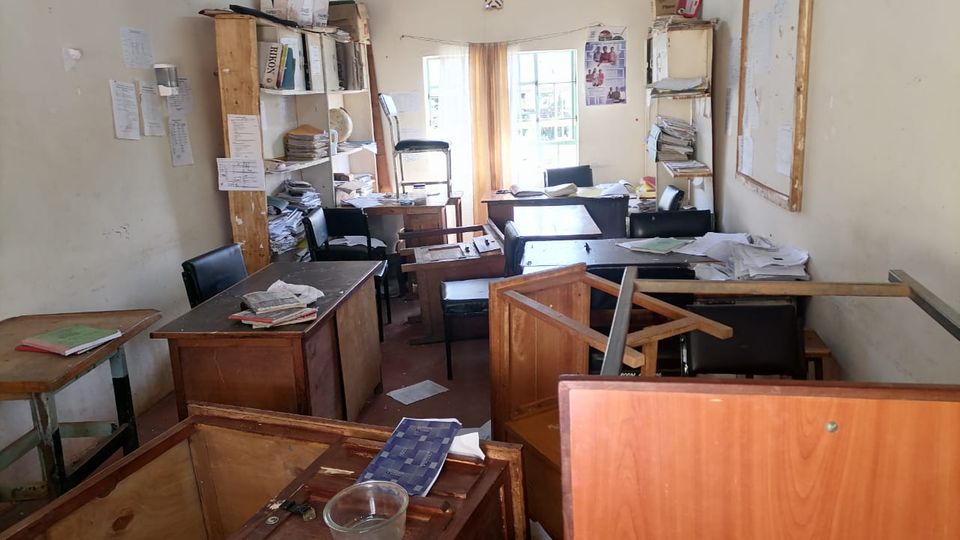 Students of Kimilili Boys High School in Bungoma County staged a protest on Sunday night after a Form Two student was said to have been brutally assaulted by a prefect over suspicion of possessing marijuana.

In anger, the students destroyed window panes, classes and teachers offices, and also engaged Kimilili police officers in running battles from 9pm to about 6am.

They accused the school’s prefects, led by the deputy academic prefect, of high handedness and of harassing the student whom they said was innocent.

Some of the students sustained injuries while scampering for safety after police used teargas and shot in the air to contain them.

Some of the students, mostly Form Ones, fell into septic tanks while attempting to escape the police.

Pupils who spoke to the Nation said the prefect had confronted the younger student after he suspected that he was a marijuana smoker. He then demanded that he mentions other smokers and unruly students.

The prefect is said to have assaulted the pupil with wires on his back, leading to severe injuries.

The boy, in tears, went back to his colleagues in the dormitory after the punishment. When he showed the injuries to other students, they became agitated and went on a rampage to demand justice.

“When we went to report to the deputy academic master, he said to hold the story and we solve it amicably, something that did not go well with us,” a student who sought anonymity told the Nation.

The students say they are incensed by how much power the school has given to prefects, noting that they tend to abuse it and victimise other pupils.

Some of the students who fled the school in the fracas spent the night in the cold.

“We are wondering why police had to teargas us and fire at us when we were only holding peaceful protests for one of our own who had been brutally beaten,” said another student.

The student who was assaulted by the prefect ran away during the fracas and had not returned to the school by press time.

“We want Magoha to come and intervene…Our teachers have given prefects too much power…they even eat more food than other students and are listened to more than the rest of us,” said another student.

The school’s administration later announced that the institution has been closed indefinitely.

Bungoma County’s Education director Philip Chirchir said it was very disturbing for students to go on a rampage and destroy property that their parents will pay for.

Mr Chirchir also regretted that the students were sent home yet again after being away for 10 months due to the Covid-19 pandemic.

He said those peddling drugs among them will soon be caught and dealt with accordingly.

The education official further asked students with information to give it to teachers and security agents as they work to restore discipline in the school known for academic and sporting excellence.

“The board agreed that since tension is high, you should take a break and return on a date that will be communicated to by the principal,” he told the students and asked them so soul-search and return when ready to learn.

Kimilili Deputy Commissioner Tarus Kiplagat said police launched a probe into the allegations of rampant drug abuse in the school.

““Drugs are not allowed in school so those found smuggling them will be arrested and will serve as an example to the others,” Mr Kiplagat said.

He added that the learners should not resort to riots since the school has a dispute resolution mechanism.

The school’s Senior Principal Innocent Cero regretted that actions by the students forced the intervention of police.

“Only a few of the boys are unruly. We are pursuing links that will lead to their arrest … they will face the full wrath of the law,” he said.

He gave the students thirty minutes to vacate the school.