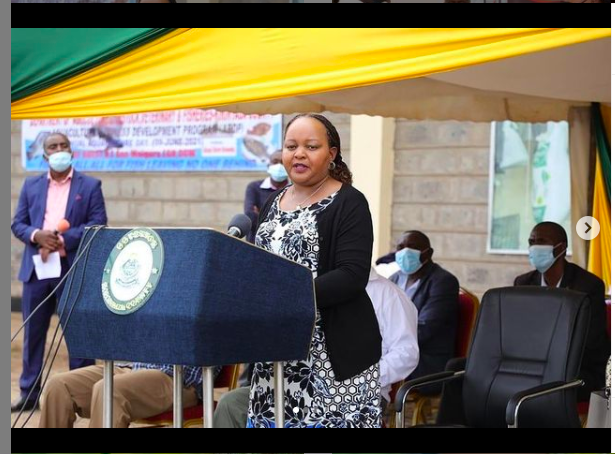 Bodyguards attached to Kirinyaga Governor Anne Waiguru have been caught on camera appearing to assault a woman who publicly confronted the politician.

In a video that has gone viral on social media, the unidentified woman is initially spotted in a meeting involving the governor a group of people.

She to ranting at the governor in vernacular, but the high-ranking politician instead elects to ignore her and walk away.

“You think I want money,” the woman is heard telling the governor.

“I know how to look for my own money. Why are they (bodyguards) pushing me away and they don’t even look for votes, I am sure he is not even a registered voter in Kirinyaga.”

At this point, two mean-looking men approach the woman and shove her away as she approaches the vehicle the governor has boarded.

Nairobi News understands the woman was complaining about what she claimed was the unfair distribution of resources in the County.

The conformation attracts the wrath of the residents at the scene, who heckled Waiguru and his team.

Perhaps sensing a bigger confrontation, the bodyguards jumped into their car and sped off alongside the governor.

The incident happened in Mwea, where Waiguru had gone to sign a deal between Kirinyaga County Government and Kenya Animal Genetic Resource Centre (KAGRC) to provide Artificial Insemination services to farmers.

On her Instagram, Waiguru at the function said ” In line with the #KirinyagaRising vision, I launched Aqua-culture program aimed at increasing the county’s production & consumption of fish. 20 farmers received pondliners, 354 farmers have benefitted across this value chain. For sustainability, my govt will provide subsidized feeds.”