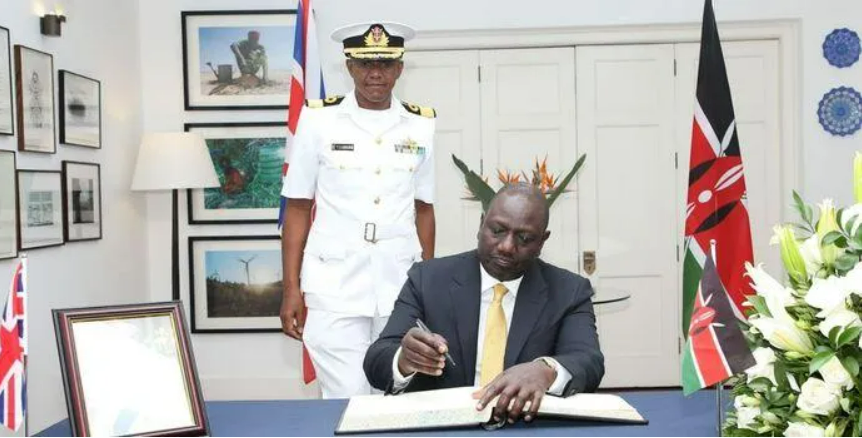 President William Ruto on Thursday caught his aide de camp off guard after he opened his door and alighted even before his handler could get close to him.

The aide, Brigadier Timothy Lekolool had accompanied the President to sign a condolence book for Her Majesty Queen Elizabeth II on Wednesday, September 14.

As is the norm, the Aide de Camp has to open the door, salute, close the door then follow His Excellency.

“That is compromising security, and he even puts the bodyguard in a fix as protocol dictates that the aide should be the one opening the door for the head of state,” a security expert was quoted by Kenyans.co.ke as saying. 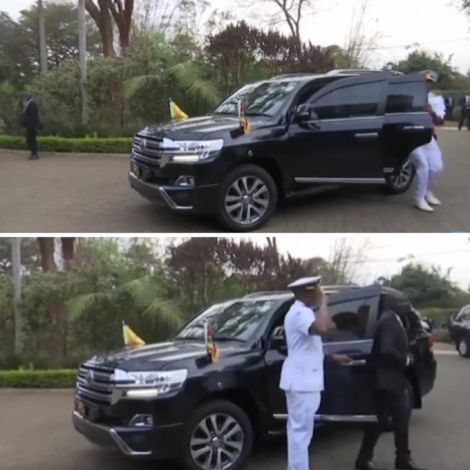 President William Ruto’s aide-de-camp was caught by surprise after Ruto opens the door himself on Wednesday, September 14, 2022.
He said that while President Ruto was at the UK Embassy, an area considered to have tight security, there are underlying reasons as to why the military officer should step out before him.

“Security of the president as a VVIP remains crucial. We cannot assume that because the threat level is low, the president can overlook the duty of the ADC,” the expert said.

He also  explained that a security team is initially dispatched to ascertain the security of the destination a president intends to visit.

Ruto was hosted by UK Ambassador to Kenya, Jane Marriott, and signed the condolence Book for Her Majesty Queen Elizabeth II, who passed away on Thursday, September 8, 2022.

READ ALSO  FULL RUTO AL JAZEERA TV INTERVIEW: I have given Uhuru a job because I am the big brother now - Ruto

“On behalf of the people and the government of Kenya, we commiserate with the people of the UK, particularly the family of Queen Elizabeth II We also congratulate the new British King, Charles III,” the President condoled.

He urged the King to carry on the Queen’s duties including ensuring that member states of the Commonwealth continue to prosper under his reign.

“The way to re-imagine the Commonwealth is to look at how it is going to play in the economies of our counties and in making sure that we leave no member behind,” Ruto wrote in the condolence book.
Related Topics:NewsRuto
Up Next

HILARIOUS VIDEO: “Riggy Gachagua” in “hot soup for messing up the oath of office”