DRC is now a member of the EAC, four years after applying 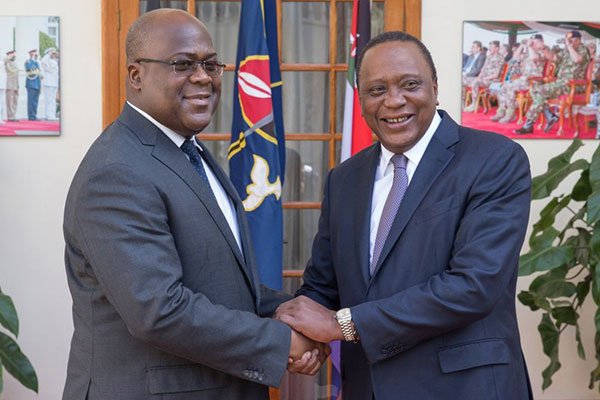 Kenyan President Uhuru Kenyatta announced today that the Democratic Republic of Congo (DRC) has been officially admitted to the East African Community (EAC) during a summit of EAC heads of state in Nairobi.

The summit’s leader, President Kenyatta, described DRC’s admittance as “historic for our community and the African continent at large”.

The action, he added, demonstrates the EAC’s ability to reach out beyond its socio-cultural bounds to new peoples and open up the area to further investment and commerce.

DRC Deputy Prime Minister and Foreign Affairs Minister Christophe Lutundula Apala Pen’Apala said in a recent announcement that the government was in desperate need of investors and was giving incentives to anyone who wanted to participate.

She went on to say that the DRC was eager to work with the EAC to address security issues in the country’s east.

President Kenyatta compared the DRC’s entry to the bloc’s member countries meeting in November 1999 in Arusha, Tanzania, and signing the treaty that established the EAC.

The former East African Community (EAC), which consisted of Kenya, Uganda, and Tanzania, disbanded in 1977, but the member nations negotiated a mediation agreement for the partition of assets and obligations, which they signed in 1984 and which included provisions for strategic collaboration.

The Arusha Treaty entered into force on July 7, 2000, after the confirmation process was completed and the documents of ratification were deposited with the EAC secretary-general.

“With the admission of the DRC, the community will significantly expand the various aspects of mutual benefit for all. Indeed, the combined population and GDP (gross domestic product) of our community will grow by 50 per cent and 25 per cent respectively,” said President Kenyatta.

The EAC will be able to tap into a significant market in the DRC because of its enormous number of customers.

President Kenyatta’s remarks were mirrored by his regional counterparts, who stressed that the DRC’s admission to the group will strengthen regional cooperation.

“DRC’s admission into the EAC is a big event as it signals prosperity to the citizens. As leaders, let’s continually strive to ensure peace, security and stability is maintained in the region,” said Ugandan President Yoweri Museveni.

Kenya Sign Language to be Recognized as Official alongside English, Kiswahili