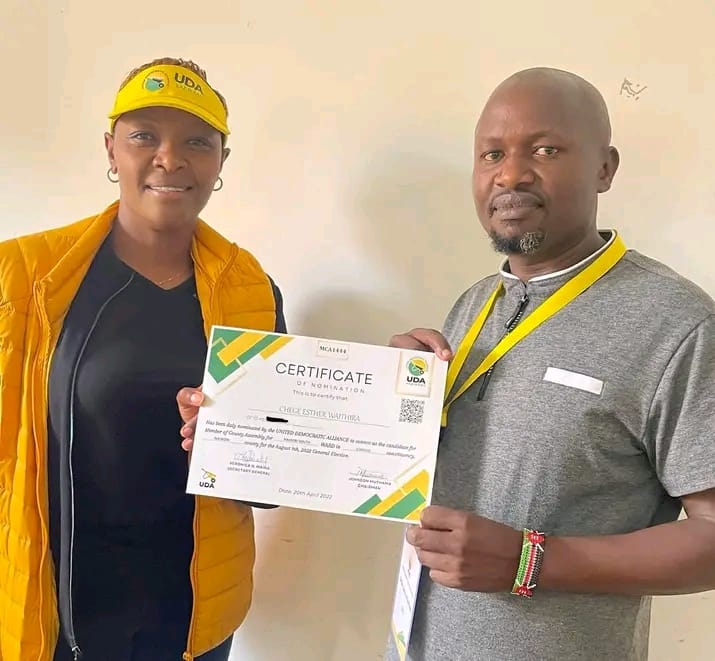 She has also linked the MP to life-threatening messages she has received after winning the party primaries.

Waithera who is the Nairobi City County Assembly Majority whip won the party primaries and was issued with a certificate on the 15th of April.

However, her opponent registered a complaint at the Dispute Resolution Committee and the case was subsequently referred to National Elections Board( NEB).

However, his opponents again appealed at the Political Parties Dispute Tribunal and a repeat nomination was ordered in less than 24 hours.

She won the repeat election with overwhelming votes but reveals that she has been receiving threats to her personal life.

Police officers have since arrested several people linked to the threats to her life.

“I received threats to my personal life and the culprits were arrested,” she said in her social media post.

She is blaming Mbugua for her tribulations and has called on the party to take necessary measures against him.

“A sitting Member of Parliament is using criminals to threaten me because his project did not succeed. I wish to remind him that the culture of political intolerance is not currently sustainable. His friends should inform him that hooliganism will never be a prerequisite to winning and maintaining a political office,” she lamented

Mbugua is the UDA nominee for the Starehe seat after defeating incumbent Charles Njagua.

READ ALSO  Senator John Methu: I'm paying the price of not wedding in church
Related Topics:News
Up Next

Meet Realty Newton, 28 Behind the Success of Real Estate Business in Eldoret