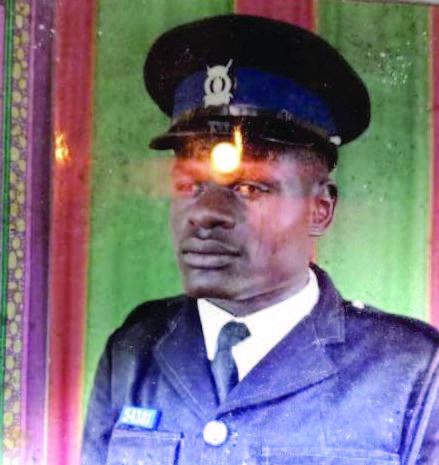 Police yesterday recovered a cache of weapons including eight firearms and about 200 rounds of ammunition at the home of a police officer in Cherang’any in Trans Nzoia county.

Ocholla said they also found a smoke trouser, a jungle pullover, an Angola jungle shirt, one modified swagger cane and a colourless liquid in a 5-litre jerry can among other things.

“He is a serving officer and we are still looking for him. The presence of such firearms and ammunition clearly indicate that he had an ill motive,” Ocholla said.

Detectives from the Directorate of Criminal Investigations (DCI) and officers from the Cherang’any Police Station raided the home yesterday at 12.30am following a tip-off. 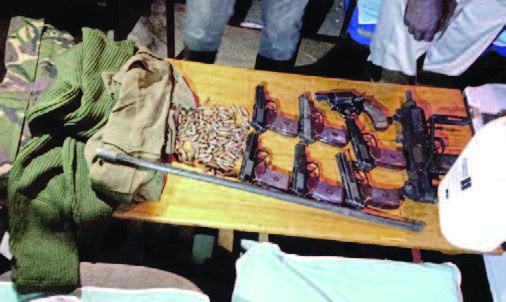 A cache of firearms recovered in the home of a police officer in Cherangany, Trans Nzoia county.

“One suspect, who is yet to be arrested escaped, leaving the door open. He is being sought since we suspect he could have escaped with other weapons,” the police officer said.

Constable Mutonyi is said to have spent some days at his rural home and left just recently.

The search was yesterday extended to Nairobi at the police staff quarters in South B but by last evening the officer had not been traced.

The Trans Nzoia sub-county DCI boss Peter Omari, who is leading the investigations, said they were trying to establish whether the weapons and uniforms were used in recent armed robberies in the region.

“We suspect the weapons and uniforms are being used in committing robberies within the area,” the DCI boss said.

Sources told People Daily that the officer is suspected to be part of a gang that has been involved in robberies in the area. Members of the gang are said to be in police uniform and ride motorcycles.

The regional commander, however, said the officer would be thoroughly grilled before appropriate action is taken.

“We have some information about the officer. Subsequent action will, however, depend on what detectives will find out upon interrogation,” he said.

Detectives are also analysing the previous reported robberies with a view to conducting identification parades.

The police did not, however, disclose whether the recovered firearms and ammunition belonged to the security agencies or were illicit.

“They will be subjected to ballistic examination to, among other things, establish if they are linked to the previous robberies in the area and its environs,” the commander said.

Police termed the recovery a major breakthrough in the fight against crime.

Some residents expressed fear and disappointment about the claims that law enforcement officers were also involved in violent crimes.

“Where did the officer get the guts to keep such a large number of firearms? He should be arrested immediately,’’ said Keffa Were, a resident.

• A jungle pullover, an Angola jungle shirt, a modified swagger cane and a colourless liquid in a 5-litre jerry were also recovered at the home.

Gen Wamala’s daughter to be buried in wedding gown