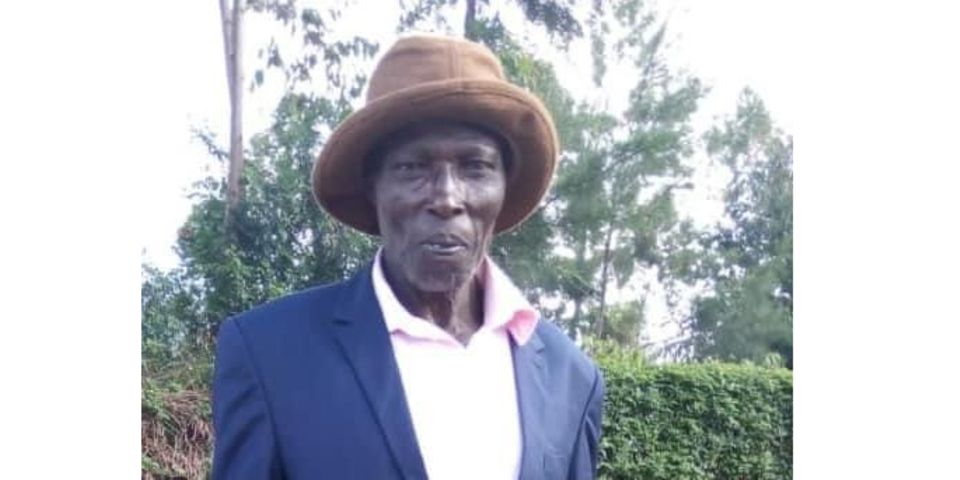 After four days in the cold, an elderly passenger, who was kicked out of the Standard Gauge Railway (SGR) passenger train on Tuesday, has been found alive.

The family of Mr Peterson Mwangi Ngunyi, said on Saturday that Mr Mwangi was found hungry, barefoot, tired but alive. He was found in Buru Buru Phase 1, sickly, without shoes and coat.

Mzee’s tribulations started on May 11, 2021 when he boarded the Standard Gauge Railway (SGR) passenger train headed to Mombasa.

The elderly man, who is also mentally ill, took the 8am Madaraka Express to the coastal city from the Nairobi terminus in Syokimau only to be kicked out at Athi River station on grounds that he had an invalid ticket.

But his family have produced records of the ticket purchased and said that Mwangi has a mild memory loss which does not affect his way of life.

The family says when Mwangi was kicked out, they were informed that he had a ticket of a minor but the details on the message they received after paying using M-pesa indicate it was for an adult, Second Class, Coach 5 Seat 61, Train N2. But he ended up on coach 6, which put him on the radar of the train officials. They also wonder why the train attendants were not humane in considering what would happen to such an elderly man before ejecting him in the middle of his journey.

In its defence, Kenya Railways insists that during a routine ticket inspection on the train, the operators realised that Mr Mwangi was in possession of an invalid ticket.

“The invalid ticket belonged to a passenger who had travelled the previous day from Mombasa to Nairobi,” Kenya Railways said in a statement.

How the old man managed to beat the stringent checks through the Nairobi terminus using an invalid ticket, only to be kicked out of the train along the way is the biggest puzzle that has brought Kenya Railways and the Chinese operator to fresh public scrutiny.

Kenya Railways have failed to explain how it was possible for Mr Mwangi to go through all the checks at the Nairobi terminus before getting on the train with an invalid ticket.

Kenya Railways said that its procedure dictates that any passenger found with an invalid ticket on the train is required to either pay for the ticket at the destination, or alight at the nearest station.

The train crew asked the 71 year old to call his family members to pay for his journey but he had neither a phone nor any contact through which he could get assistance. Under pressure from the crew, Mr Mwangi decided to alight at Athi River Station. But being sick, he did not know where to go and was missing for days.

“Upon ejection at Athi River Station, Mzee was asked to pay fare to Athi River plus a fine which he did. It’s after then that it’s said that he left the Station on a bodaboda saying he has gone to his son,” Mzee’s family says in their statement.

Mr Mwangi’s family filed a missing person’s report at the Mombasa Terminus when he did not arrive on the train as scheduled. Kenya Railways insists that it was not notified that the passenger had any special needs and that the procedure requires that any person in need of special attention should be accompanied by their kin or if travelling unaccompanied, the kin should notify the train crew ahead of time.

“We wish to clarify that KR officers treated the passenger with utmost respect and followed the necessary procedures put in place when such incidences occur,” Kenya Railways said.

“We wish to notify our esteemed customers that we do not take this matter lightly and are working closely with the police who have circulated the missing person report to all police stations countrywide in the hope of reuniting Mr Mwangi with his family,” the authority added.

This is not the first time the train has been caught in the wrong side of things. In the early days of its operations, there were reports of passengers who died on the train due to lack of medical support and an ill prepared crew in the cases of emergencies.

The Madaraka Express Chinese operator has also been on the spot for racism and discrimination of locals.

Kang’ata: BBI ruling has vindicated me