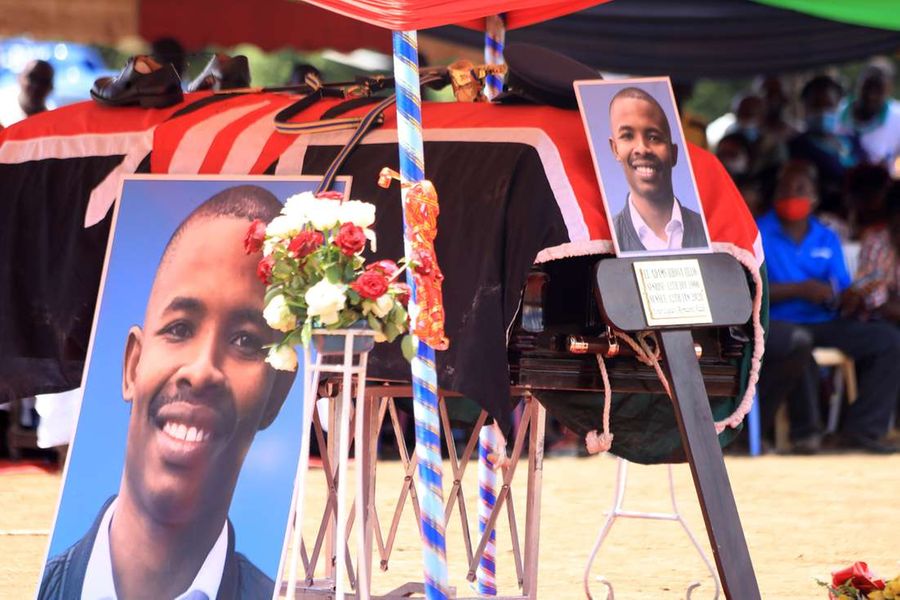 Emotions ran high Saturday at the funeral of Kenya Airforce Lieutenant Adams Rhova, who died in a plane crash inside Tsavo East National Park a week ago.

Hundreds of people turned up at Kulesa Village in Tana Delta to pay their last respects to the 30-year-old, many describing him as the most humble man in the village.

Sandra Kadzo, his widow, broke down while reading her eulogy so her sister stepped in.

It emerged that the two, who had been planning to hold their wedding in February, got married civilly in 2019.

“You leave me an empty shell, another flight without a radar, and a captain without experience in this murky turbulence. Love of my life, my husband, as we lay you to rest, know that you leave me stranded, but the promise of forever I shall keep till my last breath,” she said.

Ms Kadzo also spoke of Adams’ last words to her, which she said seemed like a farewell message.

“Each day of our lives is by God’s grace, but love is a choice I have made to give you, in life and also in death,” she said.

Adams’ mother, Yunia Hadulo, also broke down while reading her tribute to her last born so her sisters took over.

“Only God knows what he has taken from me and only he knows how he will settle the score for his work is always perfect,” she said in the tribune.

Adams’ brother Aba completed the tribute that their other sibling, Alpha, could not finish reading.

Alpha said that in their last conversation the day before the plane crash, they talked about their father, who died 12 years ago.

“It was never meant to beckon death. We were just missing our father, but death seemed to have eavesdropped on our conversation and chosen to pick him,” he said.

Rtd Major Dhadho Godhana said Adams was a pacesetter for the people of Kulesa.

“His spirit still fights on and residents ought to appease it by joining the Air Force in his respect,” he said.

Former Garsen MM Danson Mungatana also urged the Kenya Defence Forces (KDF) to increase the number of recruits from Tana River, as a tribute to Adams.

“Kindly come and recruit from this village to fill the void left by Adams. It may not heal the family but it will appease his spirit,” he said.

Others present were Tana River Woman Representative Rehema Hassan and a platoon of soldiers who worked with Adams.

Adams was the pilot of the Harbin Y-12 model aircraft, which crashed at Mrima Hills, Taita Taveta County.

The soldier, who had served for four years and 77 days, was honoured with a 21-gun salute.