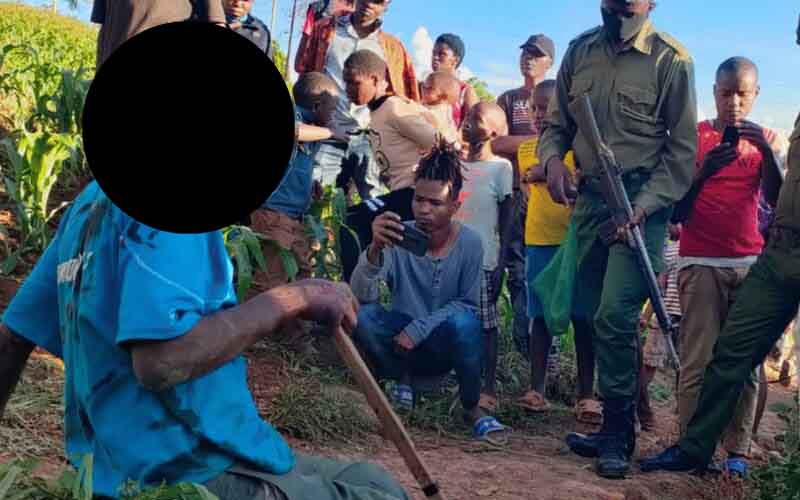 A 50-year-old man from Majengo Kismayo Estate in Embu West Sub-County survived lynching on Friday, April 16 after he was allegedly caught defiling his 13-year-old daughter.

A neighbour, Stephen Macharia, claimed he caught the suspect sexually abusing the minor in his (suspect’s) house in the afternoon.

Macharia said he had been alerted of suspicious activity in the man’s house by another resident, a food vendor who had gone to collect money owed to her by the suspect.

“Our neighbour, Caroline, told me she found the suspect’s door locked from the inside, and that sounds of a girl in distress were emanating from the house. I mobilised other residents and went to the suspect’s home, where we broke down his door, and found him defiling his teenage daughter,” Macharia told The Standard.

The informant alleges the suspect swallowed a condom which he had allegedly used in the act.

“The man is conversant with the law. He swallowed the contraceptive to erase evidence,” added Macharia.

Neighbours claim the man’s wife, a casual labourer, was away at work when the incident occurred.

“They (residents) had seriously assaulted him. The suspect was bleeding profusely from the head, when we rescued him,” Imaya told The Standard.

The administrator claims preliminary investigations indicate the suspect, who is living with disability is an ex-convict.

“We are, however, yet to ascertain how true that claim is,” said Imaya.

The suspect was taken to the Embu Level Five Hospital, where he is receiving treatment under police guard.

If arraigned and found guilty of incest with a child, which is against Section 20 (1) of the Sexual Offences Act, the suspect could spend the remainder of his life in jail.

Related Topics:NewsStephen Macharia
Up Next