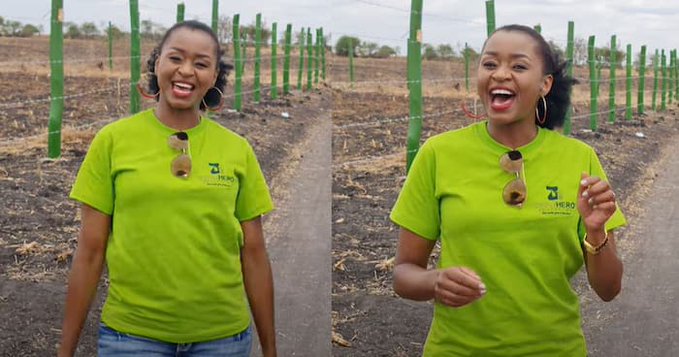 Veteran gospel musician Esther Wahome has opened up on the type of man she would want to marry her daughter.

Speaking on Bonga Na Jalas, the Kuna Dawa singer said her daughter is almost finishing university and could soon be a grandmother.

Asked about the type of man she would like to see her daughter settle down with, the 46-year-old said:

“Because she is well brought up, I pray that she would look at the values the man has. I would want him to be genuine, God fearing, and love and treasure my daughter.”

Wahome, also a preacher, addressed the departure of gospel artists to secular music. According to her, they were singing for people, not Christ.

“Being a gospel musician is knowing why you are there. I sometimes take yearlong breaks without singing, but I don’t decamp.

A gospel musician sings for Jesus, not people,” she said.

Wahome disclosed that she was touring abroad, but the COVID-19 pandemic forced her to return to Kenya.

“I was almost locked down in Europe because of the pandemic,” she said.

Wahome opened up on the inspiration behind her timeless Kuna Dawa hit, saying:

“Like many of my other songs, Kuna Dawa is about hope in Christ. God’s word was the inspiration.”

The songstress further said she would not say the song is her biggest, explaining that:

“My songs are like my children. They have different potential and preach differently. I consider all my songs hits because they reach other people at different times and in different situations.

I have gone to countries that love other songs more than Kuna Dawa.”

She paid tribute to him by stating:

“RIP my loving dad, my mentor, my spiritual cover, my prophet, my friend. This is the second day since you were transferred to heaven and though I know you are in a better place, the pain is unbearable.”