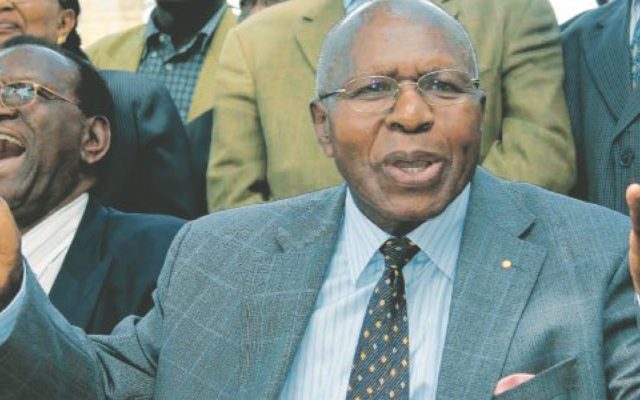 Nyachae died at the Nairobi Hospital, his family confirms.

Nyachae vied for presidential seat in 2002 and came third behind then KANU’s presidential candidate Uhuru Kenyatta and Narc’s Mwai Kibaki.

Born in 1932 to the legendary colonial-era chief Musa Nyandusi, Nyachae belonged to the first crop of British-trained African administrators.

He attended Torquay College, UK, between 1957 and 1959 and later Churchill College, Cambridge.

He rose through the ranks from a District officer in Kangundo and other parts of Machakos District in 1963 to a Provincial Commissioner between 1965 and 1979 and later the Head of Civil Service and Secretary to the Cabinet in the Moi regime.

From the civil service, he vied and won the Nyaribari Chache seat on a Kanu ticket in 1992.

Moi would appoint him the Minister for Agriculture and then Finance.

In 1999 he fell out with Moi and was moved to the less glamorous Ministry of Trade.

He later joined the Opposition, his party being Ford-People on whose ticket he would unsuccessfully vie for the presidency in 2002.

In 2004, a beleaguered President Kibaki invited him to the government as the Minister for Energy and later Energy.

In 2007 Nyachae failed to recapture his parliamentary seat after which he started disappearing from the limelight.