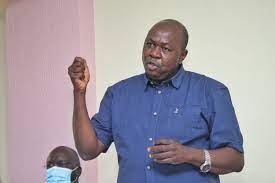 Former Police spokesperson Charles Owino will present his manifesto next week. This is after officially joining the Orange Democratic Movement (ODM) party.

Mr Owino stepped down from the National Police Service on June 2021, in order to run for governor of Siaya.

Officials from the Alego-Usonga branch of the ODM welcomed him to the party in Siaya town, where he promised to hit the ground running and win the county’s highest political post.

“This should put to an end the wildly held allegations that I am not in ODM. Now that I have removed my police uniform, I call on my opponents to prepare for a tough battle. After serving in the police service for 29 years, I am now ready to transition to politics,” Owino said.

He claims that his senior-level experience offers him an advantage over his opponents.

“I am calling on Siaya electorates to consider putting into office someone who is capable of implementing projects that will transform the landscape of this region,” he said.

The former police officer claims that his motto “pesa mfukoni, ugali kwa meza” will ensure that all homes have access to basic necessities and will protect them from rising living costs.

“While the country will go to the polls on August 9, we want to finish the race on April 15 after ODM conducts its party primaries,” he said.

He urged the party’s national elections committee to ensure that the election is held in a democratic, fair, and transparent way.

READ ALSO  Midiwo was deserted in his darkest hour

“Even as I commit to support whoever will emerge as the winner, I call on others to be prepared to accept the outcome of the elections if they are defeated,” Mr Owino said.

Mr Gumbo’s candidacy, on the other hand, was disqualified by Mr Owino, who claimed that it violated the regional balance criteria that were agreed and ratified in 2013.

“Having Gumbo, who hails from Rarieda that is an extension of Bondo Sub County as a Governor, will create a big imbalance in the county. From Bondo, we have Dr Oburu Oginga going for the Senate seat while Raila Odinga is set to be Kenya’s fifth President,” he said.

He emphasized that, with Mr Odinga at the leadership, Mr Orengo should not desert him on the national stage, where he has undertaken crucial roles in the past.