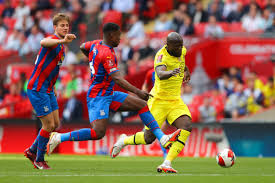 SuperrSport viewers on DStv and GOtv can look forward to action from the FA Cup final, with Liverpool taking on Chelsea at Wembley Stadium in London on the afternoon of Saturday 14 May 2022.

DStv and GOtv are the only true home of football in Africa, offering a range and depth of action that no other rival can match – it’s literally ‘Unbeatable Football’! If you’re going to spend your money on something, it may as well be on the best football in the world.

The FA Cup final will be a replay of the Carabao Cup final from earlier this year, a match that saw Liverpool overcome Chelsea on penalties to claim the trophy. Reds boss Jurgen Klopp is hopeful that his charges can win a first FA Cup title in his tenure.

“We have to be angry in a good way, greedy all these kinds of things like you are if you have won nothing,” said Klopp.

Blues manager Thomas Tuchel, meanwhile, will hope it is third time lucky for him as far as domestic cup finals are concerned, having lost last season’s FA Cup final to Leicester City as well as going down to Liverpool in the Carabao Cup back in February.

“Yeah of course, of course [we’re looking for revenge],” Tuchel admitted. “We will not get the Carabao Cup final back but we are again in Wembley, again in an FA Cup final in two consecutive years which is great. We are also very proud, we have a lot of respect for the FA Cup, such a traditional respected cup worldwide and to be part of it and a final against Liverpool in Wembley is huge.”

Sadio Mane – The Senegalese has been in great form for Liverpool throughout this season, with manager Jurgen Klopp describing him as a “machine”. After two goals in the semifinal against Manchester City, Mane will be hungry for more in this clash with Chelsea.

Mason Mount – The English attacker adds mobility and unpredictability to Chelsea’s attack which will make him a key figure for this FA Cup final. Mount will hope to exploit pockets of space between Liverpool’s defense and midfield.

In head-to-head stats, Liverpool and Chelsea have met in 191 matches across all competitions since their first clash back in 1907. The Reds have claimed 83 wins compared to 65 for the Blues, while 43 games have been drawn.

The teams have already met in one cup final this season, playing out a 0-0 draw in the Carabao Cup at Wembley Stadium in February. Liverpool won 11-10 in an epic post-match penalty shootout to claim the trophy.

Jurgen Klopp v Thomas Tuchel – Klopp will ask his team to play with aggression and intensity to try and blow Chelsea away early, while Tuchel will look to outsmart Liverpool with tactics, composure, and patience.

Fabinho v Jorginho – Of these two deep-lying midfielders, Fabinho is the more defensive-minded player, while Jorginho offers greater creativity. The pair will battle for control of the ‘engine room’ at Wembley Stadium on Saturday.

Virgil Van Dijk v Kai Havertz – Havertz has the happy knack of scoring key goals for Chelsea, but he will be up against a formidable direct opponent in Van Dijk, who is arguably the best center-back in world football today.

No rival can compete with SuperSport’s coverage. Our viewers on DStv and GOtv enjoy an unrivaled selection of football from around the world!

Don’t miss the New Football Season on SuperSport on DStv and GOtv. Visit www.dstv.com and www.gotvafrica.com to subscribe or upgrade, and join in on the excitement. And while you’re on the move, you can stream matches on the DStv App.