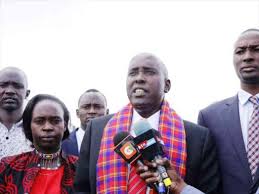 The Kajiado gubernatorial race is shaping up to be a grueling battle pitting three heavyweights as the clock ticks towards the August nine elections.

Incumbent Joseph Ole Lenku will fly the ODM flag against Jubilee’s David Nkedianye and UDA’s Katoo Ole Metito who won the ticket in the party primaries.

Analysts have put together various factors that define voting patterns in Kajiado and why the incumbent could edge to victory if everything falls into place.

The factors include the tribal matrix and voting patterns regarding the current political situation pitting Kenya Kwanza and Azimio la Umoja, clan factors, and the influence of various party leaders in the Maa region.

A closer look at the registered number of voters provided based on the  IEBC statistics and the latest numbers shows that Ole Lenku simply needs to keep his strongholds intact to emerge victoriously.

Both Nkedianye and Ole Metito have set their eyes on the Kikuyu vote while Ole Lenku has cast his net wide both the satellite towns and the reserves. The Kikuyus are mostly in towns while the majority of the Maasai are in the reserves.

Analysts opine that Nkedianye, who has chosen MP Joseph Manje will take a good pie of the Kikuyu vote just as Ole Metito who is riding on the UDA wave among the Kikuyu community bag a sizable number of votes.

Governor Lenku has his loyal Kikuyu supporters who are likely to stick with him to the end when ballot day comes.

Lenku received a major boost in mid-April when Wiper leaders called on the 48,268 Kamba voters to rally behind him. He is also expected to bag a majority of the Luhya, Luo, and Luhya votes because of the ODM factor.

With ODM leader Raila Odinga expected to tour the county in the company of Kalonzo, this will be a double harvest to Lenku’s vote hunt.

“A look at the constituencies shows that  Kajiado North where Nkedianye and Ole Metito have set their vote basket has the highest number of voters with the latest figure at 127,953. Governor Lenku still enjoys support in wards like Olkeri which has 30,292 voters. Oloolua has 32,274 and parts of Ngong have 20,998 voters,” said Noah Tingide, an analyst in Kajiado.

According to Tingide, Kajiado Central which is an ODM stronghold and Lenku’s vote yard as well has 56,434 voters while Kajiado West another of his stronghold has 64,026 voters.

Lenku has been putting in place a strong team and recently welcomed  Kajiado East ODM Parliamentary aspirant lawyer KOIN LOMPO PAPAA, who will be nominated to be Kajiado County Assembly Speaker after this year’s elections.

The decision was made after intensive consultations between Governor Joseph Ole Lenku and Mr. Lompo’s team of elders and political advisers from Kajiado East Constituency and officials of the ODM party.