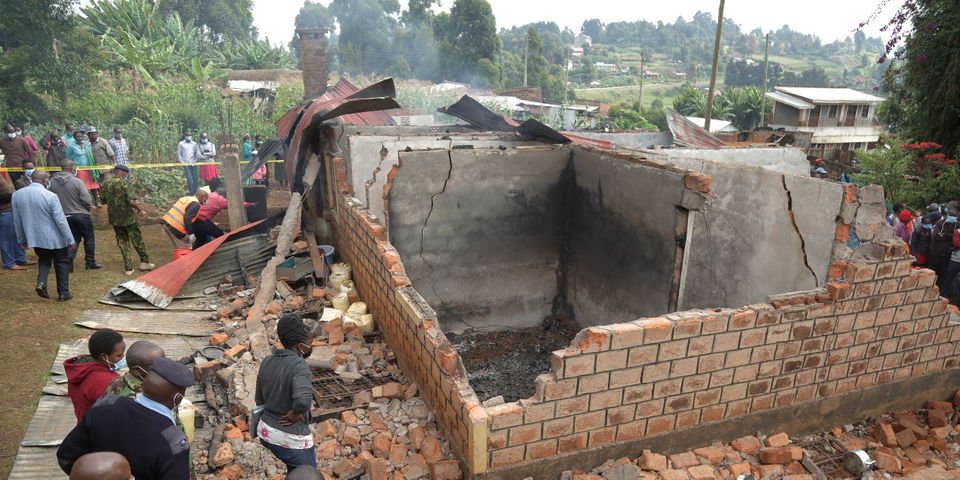 The family of a couple burnt to death in a suspected arson attack by unknown people in Sameta, Kisii County, have accused police of bungling investigations and want the Directorate of Criminal Investigations (DCI) to intervene.

Mogoa Moruri, a retired teacher, and his wife Florence Mogoa, who was the headteacher of Gekongo SDA Primary School, died on Thursday morning after their house was engulfed in flames at around 3am.

The family has disputed claims by Kisii County Commissioner Allan Machari that the couple may have died in a fire caused by a gas cylinder explosion.

The family wondered why the fire appeared to be intense in the bedroom where the couple slept, instead of the kitchen where the alleged gas explosion took place.

The family faulted police for allowing interference with the scene by letting people go inside the torched house.

This, they said, interfered with evidence of what may have transpired on the day the house went up in flames.

Speaking on Friday at the scene, the family which included children of the victims, brothers, sisters and in-laws, said it is also strange that there were very few burnt items in the house, an indication that those behind the arson may have looted property before setting the house on fire.

They claimed they found the house had been locked from outside, a suggestion that the attackers did not want the couple out of the house alive.

The family members said it is strange that the county commissioner had rushed to make comments on the cause of the fire even before investigations were completed.

Caleb Mogoa, a son of the victims, urged the DCI boss George Kinoti to set up a team to investigate the incident afresh.

On Thursday while addressing the media, Mr Machari said preliminary investigations showed that the fire could have been a result of a gas explosion.

Mr Amos Ooga, a brother to Florence, said neighbours heard a commotion and a lot of movement all night long, before realising that Mogoa’s house was on fire.

“This area has many cases of burglary, and they feared that maybe they were under attack, only to learn later of the fire,” said Mr Ooga.

“We are calling on the police to get the perpetrators. What we have witnessed here is uncalled for,” said Ms Machuka.

On Saturday, Kisii County Police Commander Francis Kooli called for calm and patience, saying samples were taken from the scene for analysis.

“This will determine the cause of the fire. Residents told us they heard an explosion and gas cylinders were found at the scene. A nozzle was missing,” he said.