Family in agony as month's search for son, 17, fruitless 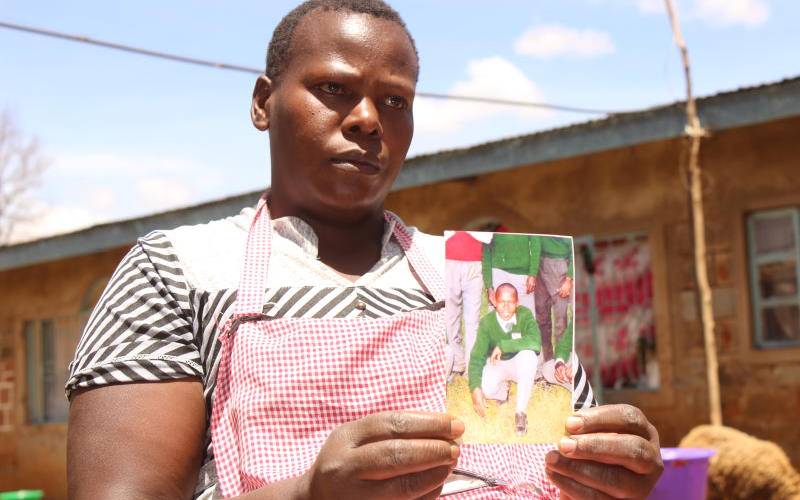 James Vala left his home in Langas, Eldoret on March 24, but has not been seen since.

Vala, 17, was wearing a pair of dark-grey jeans trousers, a black jumper and a cap.

The Form Two student at Wareng High School in Uasin Gishu had lunch with his younger brother, Alex Ndandu, before he left home. What followed is an agonising search that until yesterday afternoon, was yet to bear fruit. Ndandu still wonders where his brother is.

“I thought he had gone to see my mother, who sells groceries in Kona Mbaya, a stone’s-throw away from the house. That day, my brother was calm and composed,” says Ndandu.

His mother Rose Mwongeli says she left the house for her grocery business after lunch, only to find out later that her son had not returned home. Mwongeli said the family began to search for the boy the following day in neighbours’ houses, but it was all in vain.

“Vala was a quiet boy and didn’t have many friends. He always stayed at home during the school holidays. I was shocked he just left home. He carried no clothes. I have been crying every night, but I still cling to the hope that my son is alive and I urge him to return home,” Mwongeli said yesterday.

The mother said her son was obedient and had not had any indiscipline issues either at school or at home.

Vala’s father Paul Matheka, a fruit vendor in Eldoret, said he filed a missing child report at Langas police station on March 28, after a frantic search did not help.

“I have been visiting several police stations in Uasin Gishu, including Langas and Eldoret Central, to find out if the police have received any reports. Unfortunately, they have no information,” Matheka said.

Matheka said he had asked the boy’s classmates and relatives about Vala’s possible whereabouts, but no one had spotted him since he disappeared.

“I thought and hoped that he had travelled to Machakos or Makueni to meet his relatives, and that he could not travel back home because of the lockdown in five counties, which was announced by the President two days after he disappeared, but I was wrong,” he said.

Related Topics:NewsPaul Matheka
Up Next

Magufuli funeral scenes made me imagine my death: Kiraitu on Covid battle